The Australian Business Summit Council Inc. celebrates the launch of the second issue of their magazine, EKONOMOS 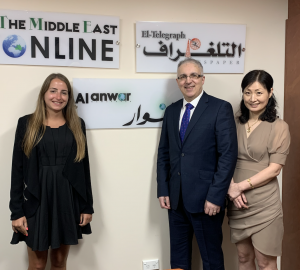 Australia has long been a leader within the economic sector, but one organisation is working to further strengthen the country’s ties with the rest of the world.

The Australian Business Summit Council Inc. is a not-for-profit organisation that works to support Australian businesses both nationally and internationally.

There they promoted the imminent publication of the second issue of their annual magazine, EKONOMOS, which is derived from the Greek term meaning economy.

Speaking to Australia Middle East Media (AME), Dr Alafaci revealed the strong ties the council has with embassies and consulates around the world.

“We are an internationally focused organisation with strong relationships with people in the Middle East, the Saudi Arabian consulate, South America, Africa and we’re working on expanding with further with the United States,’ Dr Alafaci told AME Media.

He stressed that networking with different people around the world is what will help push Australia’s economy and better it for the population.

“Australia can do better; we are very active people and we want to make a practical improvement of Australia’s improvement in the world.”

Listed on their website, Dr Alafaci discloses the ABSC Inc. aims which include to serve as a medium for business policies and practices to push for a sustainable Australian economy as well as to assist business leaders to broaden their networking opportunities domestically and internationally.

They also aim to lobby for fair trading rights of Australian businesses locally and internationally as well as engaging in academic discussions on issues affecting business relationships between Australia and the rest of the world.

Despite ABSC Inc. being around for only two years, Dr Alafaci and Mrs Alafaci were incredibly pleased with the turnout at their recent luncheon with more than 30 VIP members.

“The luncheon was very successful for a number of reasons including the fact that it was held at a lovely venue with a calibre of people ranging from business workers to diplomats,” he told AME Media.

“The best thing to come out of the press release, apart from the fact that we had about seven representatives, was the 20-minute Q&A session which was very helpful.”

Dr Alafaci also spoke of the imminent release of the second issue of EKONOMOS, which will include intriguing articles written by members of the Australian and international business and diplomatic community.

There will also be articles by Dr Alafaci himself about Australia’s economy and what can be done to strengthen it.

ABSC Inc will also be holding their annual gala dinner on December 3 but with fewer guests to last year due to COVID-19 restrictions.

Dr Alafaci hopes with the passing of COVID-19 ABSC Inc. will increase their networking, events, seminars and trade delegation visits.

He also hopes that EKONOMOS could be released biannually, along with their monthly newsletter Rotator, which is individually emailed to 2,000 members by Mrs Alafaci.