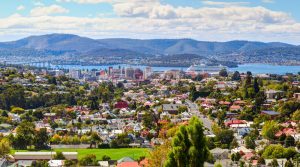 Tasmania has maintained its stronghold as the nation’s best performing state economy as the Apple Isle’s population and property market booms.

CommSec’s quarterly State of the States report found Tasmania led all other states and territories on dwelling starts- which means new properties being built – and population growth.
It was closely followed by the Australian Capital Territory, which was ranked second thanks to low unemployment and stable retail trade.
The State of the States report ranks each state’s economic performance on eight key indicators including retail spending, population, unemployment, population growth and construction.
It’s the fifth quarter in a row Tasmania has taken out the top spot, emerging as the nation’s highest growing place of residence of business during the COVID-19 pandemic.
CommSec’s Chief Economist Craig James said more residents in Tasmania and the ever-strong public service sector are keeping some states stronger than others.
“Tasmania and the ACT have firmly held their positions at the top of the performance rankings due to above-average population growth in Tasmania, and a strong job market in the ACT,” Mr James said.
“As a result, it’s unlikely we’ll see any considerable change at the top of the rankings in the near future.”
He believes that the biggest mover and shaker will soon be WA, which has jumped from sixth place to third place, it’s highest ranking in six years.
“The main challenge will come from Western Australia, which improved five places on dwelling starts, two positions on both relative unemployment and housing finance and one place on relative economic growth,” Mr James said.
“Despite these gains, Western Australia fell five places on equipment investment and one place on retail trade.”
Looking down the list, Victoria came in at fourth place followed by South Australia in fifth and Queensland in sixth.
NSW fell to the seventh place despite strong construction work and the Northern Territory remained at eighth place.
Mr James said mining and construction will continue to invigorate WA’s coffers while Queensland may be given a boost by travel restrictions easing.
“The West Australian economy has significant momentum provided by mining and home building. In fact, skill shortages are identified in many building trades,” Mr James said.
“Queensland also has scope to lift its ranking in 2021 due to improvement in the job market, rising in-bound migration and increased domestic tourism demand.”