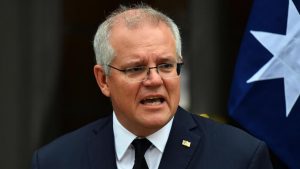 By: Rosie Lewis
Scott Morrison is staring down demands to set a date for reopening the international border as Josh Frydenberg declares “we cannot afford to take the risk” and all that matters is keeping Australians safe.
With a federal election due by May next year, when the international border is expected to remain closed, the Prime Minister and Treasurer have adopted a more conservative approach to opening up the country.
But NSW Treasurer Dominic Perrottet said the state government could go it alone and allow vaccinated residents to use home quarantine when returning from overseas if it helped the economy, and ramped up calls for the government to specify when the international border would open.
“I saw the Prime Minister come out the other day and say that Australians aren’t interested in opening international borders. Well that might be the case and it might not be a comfortable discussion point but we can’t sit here closed to the rest of the world indefinitely,” Mr Perrottet told Sky News.
“We may fall short of a date that we set but that’s okay, we need to know what success looks like, we need to know where the strategy is and how much of the population that is required to be vaccinated then leads to those borders reopening. If we don’t set a date and we don’t have a plan then we’ll just meander along.”
Tuesday’s budget assumes overseas travel will stay at low levels through to at least the middle of 2022, after which international tourism is expected to experience a “gradual recovery”.
Asked if NSW could offer home quarantine to vaccinated residents before movement from the commonwealth or the states, Mr Perrottet said: “We’re open to any ideas and policy proposals that will drive economic growth and opportunity for people in our state.
“The biggest issue on the ground right now when you’re talking to the business community is labour shortages and access to skills. So if we don’t work through this vaccination program as quickly as possible and don’t have a road map where we can open international borders, there’s going to be some other challenges that come our way that we may not have thought of last year.”
In his post-budget address, Mr Frydenberg said the “most important” assumption affecting Treasury’s economic forecasts was Australia’s ability to contain the local spread of COVID-19.
He said an extended lockdown, like what occurred in Victoria last year, would “very much damage” the economic recovery.
“We cannot afford to take the risk right now to open our borders in a way that would compromise the health of Australians. So, we’re unapologetic about putting the health of Australians first,” Mr Frydenberg said.
“The key factor, the central factor, the only factor for us is what keeps Australians safe? And it’s not simply the rollout of the vaccine that is a factor for the Chief Medical Officer (Paul Kelly) in making decisions around borders. They also need to take into account what is happening with the virus globally, its transmissibility, new variants of the virus, and what it would mean for Australians’ health and safety.”
As the Morrison government faces criticism for failing to include funding in the budget for new quarantine facilities, Mr Frydenberg said the responsibility rested “primarily with the states” but the commonwealth was considering a proposal from Victoria.
“With respect to new federal investments in quarantine and the states, the first proposal that we’re looking through is the one from Victoria and we will respond to that in due course,” he said.
Labor seized on what it called “mixed messages” on key budget assumptions, after Josh Frydenberg said the “population-wide vaccination program” the budget says will “likely” be in place by the end of 2021 included both doses for Australians who wanted to be immunised.
Mr Morrison meanwhile repeatedly pointed out the budget make no reference to whether the assumption was for a second dose, while Health Minister Greg Hunt said it would depend on when in December people received their first Pfizer dose.
“Every announcement in Scott Morrison’s budget relies on our economy staying open. The budget assumes every Australian will be vaccinated by the end of the year. The Treasurer said that would mean Australians would be fully vaccinated,” opposition health spokesman Mark Butler said.
“But today the Prime Minister and Finance Minister conceded Australians won’t be fully vaccinated this year. The PM has two jobs – vaccine rollout and safe quarantine. This budget fails on both.”