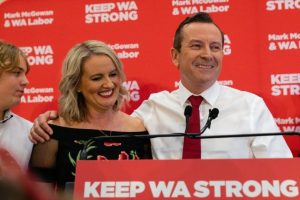 Premier Mark McGowan is set to enjoy unprecedented dominance in Western Australia, after winning an increased majority for the Labor party in the state’s parliament.

Labor is expected to claim up to 53 out of 59 lower house seats on the back of a stunning 16.9 per cent swing.

It is a nightmare scenario for the Liberals, who are set to be reduced to just two or three seats and lose their opposition status to the Nationals.

With 43 per cent of lower house votes counted, Labor has almost three times the number of first-preference votes of the Liberal party.

No government in WA has enjoyed a parliamentary majority of such a scale.

Promise to govern with ‘great responsibility’

“The magnitude of what happened today is not lost on me,” the 53-year-old premier said in his victory speech.

“With it comes great responsibility. We will continue to deliver stable, competent, responsible and caring government for all West Australians.”

“I promise to work for everyone across Western Australia over these coming four years,” he said.

“You’ve put your trust in my government and I promise we won’t let Western Australia down.”

He said the result, coming after the year of the pandemic, shows that resilience will be rewarded.

“Today is an endorsement of perseverance, hard work, optimism and never giving in.”

But Labor remained ahead early on Sunday in the blue-ribbon Liberal seats of Nedlands, Churchlands and Carine.

The notion that a safe western-suburbs seat such as Nedlands could fall to Labor would have been unthinkable even 12 months ago.

Federal Labor leader Anthony Albanese described Mark McGowan’s landslide victory as “quite extraordinary” and said it was not just about how WA Labor has handled the pandemic with its stiff border closure.

“It’s about the way WA Labor have run the economy, they have produced surpluses, they have created jobs and they have kept West Australians safe,” Mr Albanese told Sky News’ Sunday Agenda program.

“This is primarily about Western Australia, but it has to be good news for federal Labor as well.”

He said the fact a branch of the Liberal party has essentially been wiped off the map shows that they are going to struggle with a lack of resources to run an effective campaign over the next year when a federal election is due.

“They can fit people in a Mini,” Mr Albanese quipped.