NSW eases restrictions for pubs and weddings ahead of holidays 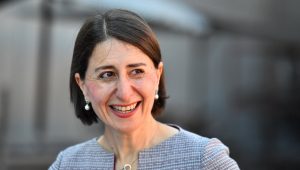 By: Josh Dye and Mary Ward

NSW Premier Gladys Berejiklian has announced a major easing of restrictions ahead of the summer holidays, including allowing people to drink while standing up outdoors in pubs.

Patrons will be able to stand up while drinking outdoors at pubs, but nightclubs and indoor pubs can only serve drinks to seated guests.

Private outdoor gatherings, such as barbecues and picnics, can double in size to 100 people.

Dance floors, including at weddings and nightclubs, can feature 50 people at a time and don’t have to be the same 50 people.

Other outdoor ticketed events can have up to 5000 people seated with the two-square-metre rule.

Uncontrolled events, such as protests and community sport, can have 3000 people.

Up to 50 singers can perform indoors, while people singing at an indoor religious service or concert are advised to wear masks.

Ms Berejiklian said the easing of restrictions was a balance between health and the economy, but warned an outbreak would trigger further restrictions.

“We will be forced to go backwards if there is an outbreak,” she said.

“What we’ve tried to achieve here is a healthy balance of giving people freedom and allowing businesses to flourish, while also maintaining those basic principles of living in a COVID safe way.”

“Two square metres means hundreds of millions of dollars injected into the NSW economy [and] the creation of thousands of jobs right across our state,” he said.

On Wednesday NSW recorded its 25th consecutive day without a locally transmitted case of COVID-19.

But the Premier again cautioned against complacency.

“Just because we haven’t had any community transmission in the last 25 days, doesn’t mean we won’t. In fact, I predict we will,” Ms Berejiklian said.

“We can’t allow complacency to creep in although it’s difficult not to let that happen especially this time of year.”