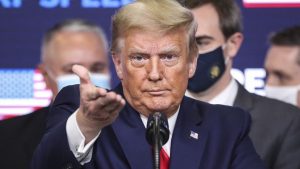 Morocco has become the latest Arab League country to agree to normalise relations with Israel in a deal brokered with US help.

As part of the deal, the US has agreed to recognise Morocco’s claim over the disputed Western Sahara region.

It is the subject of a dispute between Morocco and the Algeria-backed Polisario Front, which has been seeking to establish an independent state.

Morocco is the fourth state to make such a deal with Israel since August.

Agreements have also been struck recently with the United Arab Emirates, Bahrain and Sudan.

Along with Egypt and Jordan, Morocco becomes the sixth Arab League member to normalise ties with Israel.

What is the deal? 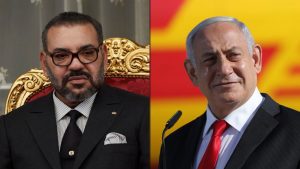 US President Donald Trump announced the agreement on Twitter on Thursday.

“Another HISTORIC breakthrough today! Our two GREAT friends Israel and the Kingdom of Morocco have agreed to full diplomatic relations – a massive breakthrough for peace in the Middle East!” he wrote.

The White House said Mr Trump and Morocco’s King Mohammed VI had agreed that Morocco would “resume diplomatic relations between Morocco and Israel and expand economic and cultural co-operation to advance regional stability”.

The deal includes the reopening of liaison offices in Tel Aviv and Rabat – shut in 2000 when low-level relations broke down after the outbreak of the Palestinian uprising – and the eventual opening of embassies. Officials said Morocco would grant direct flights to and from Israel for all Israelis.

In a televised address, he thanked Morocco’s king and said the people of Israel and Morocco have had a “warm relationship in the modern period”.

In Morocco, a palace statement confirmed the deal, saying the king, in a telephone call with Mr Trump, had agreed to diplomatic relations with Israel “with minimal delay”.

Egypt, the UAE and Bahrain issued statements welcoming the deal between Morocco and Israel.

Palestinian officials condemned the agreement, saying it encouraged Israel’s denial of their rights.

Palestinians have been critical of all the recent deals between Israel and Arab League countries. They believe the moves renege on a promise by Arab states not to embrace ties with Israel until Palestinian statehood is achieved.

Morocco’s king said the “measures do not in any manner affect Morocco’s ongoing and sustained commitment to the just Palestinian cause”, a royal statement said.

The statement added that the king had spoken with Palestinian Authority President Mahmoud Abbas and assured him that he “would never relinquish his role in defending the legitimate rights of the Palestinian people”.

It said the king had reiterated his support for a two-state solution.

What about Western Sahara? 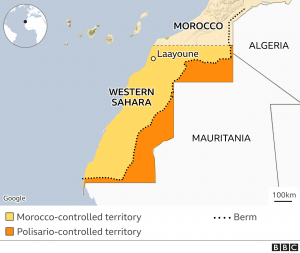 The White House said the US would recognise Morocco’s claim over Western Sahara as part of the deal.

A former Spanish colony, it was annexed by Morocco in 1975. Since then it has been the subject of a long-running territorial dispute between Morocco and its indigenous Saharawi people, led by the pro-independence Polisario Front.

Morocco says it has always been part of its territory, while the African Union recognises it as an independent state.

A 16-year-long insurgency ended with a UN-brokered truce in 1991 and the promise of a referendum on independence, which has yet to take place.

“The move shows that Morocco’s regime is willing to sell its soul to maintain its illegal occupation of parts of Western Sahara,” he wrote on Twitter.

The group’s Europe representative, Oubi Bchraya, said the change in US policy “will not change an inch of the reality of the conflict and the right of the people of Western Sahara to self-determination”, Reuters reports.

Last month, the Polisario Front said the three-decades-old ceasefire had been ended by a Moroccan military operation in a buffer zone.

Lotfi Bouchaara, Morocco’s ambassador to Moscow, told the BBC’s Focus on Africa programme that Morocco did not breach the ceasefire but that its military was responding to a provocation by Polisario fighters who had blocked a key road to Mauritania.

Morocco had reacted with “restraint”, he said.

A White House proclamation on Thursday said the US believed that an independent Sahrawi State is “not a realistic option for resolving the conflict and that genuine autonomy under Moroccan sovereignty is the only feasible solution”.

Morocco’s royal court said Washington would open a consulate in Western Sahara as part of its deal with Israel, according to Reuters.