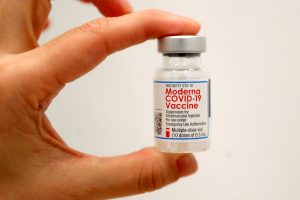 Scott Morrison has confirmed that Australia has bought 25m doses of Moderna’s vaccine, set to be the fourth Covid-19 vaccine in the Australian rollout and its second mRNA vaccine.

In a statement, Moderna announced it could supply 10m doses to Australia by the end of the year and a further 15m would arrive in 2022.

The vaccine is yet to win regulatory approval from the Therapeutic Goods Administration but Moderna says it will lodge a submission shortly.

On Thursday the prime minister said “it’s true” that Australia has bought 25m Moderna vaccines, and the first 10m doses will “come now, this year”.

“That will support the [rollout in the] back end of the year,” Morrison told the Perth radio station 6PR. “We [have already bought an additional] 20m Pfizer vaccines, we’re trying to bring as many of those as we can into the third quarter.”

The remaining 15m Moderna doses were boosters that would tackle variants, he said. Morrison revealed the Moderna vaccines are intended for people aged under 50, because those over 50 can get AstraZeneca from their GPs from Monday.

The Australian government has been under pressure from the Labor opposition accusing it of a failure to secure more vaccine deals.

Health authorities had previously explained that the government decided to purchase only one mRNA vaccine and had favoured Pfizer over Moderna, citing the former’s scale and experience.

But in early April Australia’s rollout was thrown into disarray when authorities warned that the AstraZeneca vaccine could cause extremely rare but potentially deadly blood clots and advised it was not recommended for under-50s.

That prompted Australia to buy an extra 20m Pfizer doses and negotiate to buy Moderna. Morrison revealed on Thursday that 25m doses of Australia’s total Pfizer order were expected in the fourth quarter.

The Moderna announcement follows criticism over the slow pace of Australia’s vaccine rollout and missed targets.

Stéphane Bancel, Moderna’s chief executive officer, said: “We appreciate the partnership and support from the government of Australia with this first supply agreement for doses of the Moderna COVID-19 vaccine and our variant booster candidates.

“As we seek to protect people around the world with our COVID-19 vaccine and potentially our variant booster candidates, we look forward to continuing discussions with Australia about establishing potential local manufacturing opportunities.”

Moderna will join the locally manufactured AstraZeneca vaccine and the Pfizer vaccine as the only Covid-19 vaccines in Australia. The federal government also has an agreement with Novavax but it is waiting on regulatory approvals.

AstraZeneca is being administered to over-50s through mass vaccination clinics and GPs, despite the fact that large numbers of people in priority cohorts including disability care residents are yet to be vaccinated.

Like the Pfizer/BioNTech shot, the Moderna vaccine uses mRNA technology that introduces genetic material containing the instructions to make the coronavirus’s spike protein into the body to elicit an immune response. Traditional vaccine approaches typically kickstart the immune system by exposing it to a killed or weakened part of the virus.

Clinical trial results of Moderna’s vaccine found it has 94% efficacy and nobody vaccinated in the 30,000-participant trial in the UK developed severe disease.