Australia’s economy has moved out of its first recession in almost 30 years, new figures show 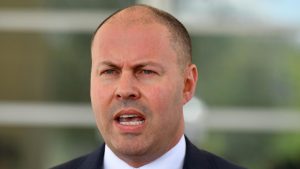 The Australian economy has bounced back from its first recession in almost 30 years, Treasurer Josh Frydenberg says.

Australia’s GDP increased by 3.3 per cent in the September quarter, figures released on Wednesday showed.

“The Australian economy is coming back,” Mr Frydenberg told reporters.

“Facing a once-in-a-century pandemic that has caused the greatest economic shock since the Great Depression, Australia has performed better on the health and economic fronts than nearly any other country in the world.”

The 3.3 per cent GDP growth was the largest quarterly GDP increase since 1976, Mr Frydenberg said.

Economists’ forecasts had centred on a 2.5 per cent rise for the quarter.

Mr Frydenberg was at pains to stress that, although Australia had moved out of recession, the country’s broader economic recovery was far from over.

“Technically, Australia’s recession may be over, but Australia’s economic recovery is not,” he said.

Victoria was the only state or territory to not experience economic growth in the past quarter, due to crippling economic impacts of its second-wave coronavirus lockdown.

“Victoria – a quarter of the national economy – has only just begun its recovery after the devastating second wave,” Mr Frydenberg said.

“In these national accounts, every state and territory saw strong growth in the quarter except for Victoria where it contracted.

“If Victoria had grown in line with the rest of the nation, national growth in the September quarter would have been 5 per cent – not 3.3 per cent.”

Household spending contributed four percentage points, as coronavirus restrictions lifted over the period across most states and territories, the Australian Bureau of Statistics figures showed.

“So what matters most here, what’s most important, is the human face and the human consequences of this deep and damaging recession and into the recovery as well,” he said.

“And what looks like a recovery on paper will still feel like a recession for too many Australians. This quarterly GDP number will be cold comfort for a million Australians unemployed.”