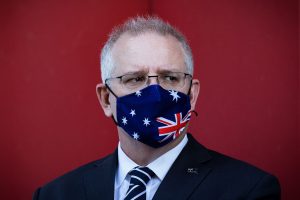 Prime Minister Scott Morrison has revealed a massive change to Australia’s coronavirus vaccination program, announcing anyone under the age of 40 can now approach their GP and request the AstraZeneca vaccine.

Pfizer is the recommended vaccine for Australians under the age of 60, with states and territories now allowing people aged between 40 and 59 to book appointments to get the shot.

AstraZeneca is earmarked for Australians over the age of 60, due to the risk of rare blood clotting disorders linked to the vaccine in younger people.

That medical advice has put further pressure on the already sluggish vaccine rollout, as all Pfizer doses need to be imported from overseas.

Australia does not have the large-scale manufacturing capability to produce the next generation mRNA vaccine domestically.

However there are ample supplies of the AstraZeneca vaccine, which is manufactured at CSL’s Melbourne manufacturing facility.

Federal health authorities have been repeatedly asked whether younger Australians could roll up their sleeves and get the AstraZeneca vaccine, if fully briefed and accepting of the associated health risks.

The answer has been that Pfizer remained the recommended vaccine for Australians under the age of 60.

But on Monday night, after an emergency meeting of the National Cabinet, the Prime Minister described the health recommendation as a “preference”.

“But the advice does not preclude persons under 60 from getting the AstraZeneca vaccine,” Mr Morrison told reporters on Monday night, while still locked away in The Lodge completing his own course of quarantine.

“And so if you wish to get the AstraZeneca vaccine, then we would encourage you to go and have that discussion with your GP and we’ve already made announcements to support those additional consultations with GPs so you can have that conversation.”

Mr Morrison was questioned further as to whether that meant “people under 40 will be able to talk to their GPs and get the jab immediately”, regardless of their age.

“Well, if they wish to go and speak to their doctor and have access to the AstraZeneca vaccine, they can do so,” he replied.

“The answer is yes, they can go and do that.”

The ABC has sought further clarification from the Prime Minister’s Office on the issue.

People over the age of 60 will still be given priority for the AstraZeneca vaccine, but younger Australians are now able to request the shot from their doctor.

Australians under the age of 40, with the exception of those in some regional areas and the Northern Territory, have not had access to the vaccine so far and would have had to wait until the vaccination of other age groups had progressed further.

The change in policy appeared to catch some medical professionals off guard.

Shortly after the Prime Minister’s press conference, the Australian Medical Association’s national President Omar Khorshid said he understood younger Australians would only be able to request the AstraZeneca vaccine if they were in a priority group.

“Maybe the government will actually open AstraZeneca up to anybody, fairly soon,” Dr Khorshid told the ABC.

“But I think it is important to recognise that the experts have recommended that for people under the age of 60, the Pfizer vaccine is more appropriate.”

He said some, but not all, younger Australians have been able to request the AstraZeneca shot for some time.

“Many GPs have said ‘no, that’s not the recommended vaccine, I’m not willing to do that’,” Dr Khorshid explained.

“And one of the reasons they’ve been concerned about that is whether the GP themselves could be in trouble if that individual then got the [blood clotting] syndrome.

“Other GPs have said, ‘well, you know, we’ll have the conversation, these are the risks, these are the numbers, if you’d like to go ahead, I’ll do it’.”

Dr Khorshid said the “slight shift in practice” was aided by an indemnity scheme now in place for GPs, protecting them if a patient develops any adverse reactions to a coronavirus vaccine.

“Up until now, GPs have been covered by their own insurance, but not by the government,” he said.

“And what the Prime Minister has announced is that government will step up to the plate and take on that extra indemnity.

“That’s going to reduce the chances that GPs, or other practitioners like nurses or pharmacists, reduce the chance that they’re going to get caught up in legal action that has nothing to do with their own practice.”

Just over 7 per cent of the population, or about 1.46 million Australians, are now fully vaccinated against COVID-19, having received two doses of the coronavirus vaccine they are eligible for.

Federal Health Minister Greg Hunt’s office says close to 5.9 million of the eligible 20.6 million Australians have received at least one dose of the vaccine.

As of the end of last week, 88,287 workers out of 262,876 across the country had reported receiving one shot of a coronavirus vaccine, while a further 42,794 workers had received their second dose.