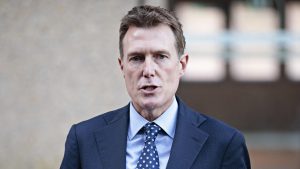 By: Amanda Meade and Michael McGowan

The ABC rejected an offer from Christian Porter to settle his defamation case weeks before the minister agreed to enter mediation, Guardian Australia can reveal.

The former attorney general has claimed a victory in the high-profile case, but it is understood he originally made an offer for a relatively modest financial settlement without an apology or a retraction of the article.

The offer was rejected by the broadcaster in early May and the two parties entered mediation on Friday 28 May, reaching an agreement on Monday.

It comes as a friend of the woman who made an historical rape allegation against Porter – an allegation he strenuously denies – separately sent the former attorney general a legal concerns notice on Tuesday over comments he made during a press conference which she says “impugned my honesty and integrity”.

Jo Dyer – who brought the case that saw Porter’s star barrister Sue Chrysanthou SC restrained from acting in his now-defunct defamation bid against the ABC – released a statement on Tuesday saying she had sent a legal notice to Porter after the fiery press conference he held after dropping his case against the public broadcaster.

The decision by Porter to drop the case has not ended hostilities between the parties, with a series of back-and-forth jabs over the deal.

Despite the terms of the agreement being confidential, comments by both Porter and the ABC journalist Louise Milligan have raised significant questions about the timing and circumstances of the out-of-court deal.

At his press conference, Porter said the ABC had approached his lawyers “last Friday” for “an urgent mediation”.

“And we agreed, we consented to go to that mediation. That mediation was requested by the ABC,” he said.

That timeline was disputed on Twitter by Milligan, who wrote that it was Porter who had “proposed a settlement first”.

“If he wants to dispute that, happy to refresh his memory and release the terms he offered,” she wrote.

The Guardian understands that the ABC had approached Porter for mediation prior to last week’s separate hearing to decide whether Chrysanthou should be restrained from acting in the case.

The offer was initially rebuffed, before the parties agreed to go to the bargaining table late last week.

But prior to that, lawyers for Porter had offered to settle the case if the ABC agreed to pay a financial settlement.

The Guardian approached Porter’s lawyers asking whether an offer of settlement, including a financial payment, was made to the ABC by Porter, but did not receive a response.

The conflicting accounts raise questions about the way Porter has sought to characterise the out-of-court deal. Since announcing that he would drop his high-stakes defamation bid, Porter has sought to claim his legal action had forced the ABC to back down, despite not securing an apology or retraction.

After a bullish press conference on Monday in which he insisted the ABC had been forced into a “humiliating backdown” and had admitted to regretting publishing what he called the “sensationalist” article, the public broadcaster issued a statement saying it “has not said that it regrets” publishing the Four Corners story at the centre of the case.

The statement also pointed out that the original February article by Milligan remains online without amendments.

“The article was not ‘sensationalist’. It was an accurate and factual report on a letter that had been sent to the prime minister and two other senior politicians,” an ABC spokeswoman said.

Meanwhile, Dyer claims that comments made about her during the press conference were “defamatory”, and has sent a legal notice to Porter.

During the press conference Porter told journalists he believed it was comments made by Dyer under cross-examination in that case which had “forced” the ABC “to ask us into mediation”.

“My view is that there being incontrovertible evidence in a court that someone was coached by Louise Milligan to destroy important communications, my view is that’s what got the ABC, forced them, to ask us into mediation and has forced them to the point where they have to say that they regret the outcome of the article,” he said.

Porter’s comments appear to refer to evidence given by Dyer during cross-examination in the Chrysanthou case. Pushed by Porter’s barrister, Chris Withers SC, over why she had deleted Signal messages between herself and Milligan – whose Four Corners story was at the centre of the defamation case – she said it was partly as a result of requests from the ABC journalist.

Dyer said it was “partly from advice” from Milligan and “more generally I guess my filing and retention processes are somewhat chaotic and those nearest to me suggested it might be better to be more cautious [given] the sensitive nature of the matters clearly being discussed in this matter”.

Dyer said she couldn’t recall when Milligan had asked her to delete the messages, but said: “At the point at which we moved to Signal Ms Milligan had obviously reinforced this was a more confidential means of communication, I think there was a hope [that] I would delete as we went along. I can say I did not take that care with the messages and I did delete them sort of en masse some months ago.”

The ABC has vigorously denied that suggestion, saying it “categorically rejects the claim” that Milligan ‘coached’ Dyer. The broadcaster has also said the comments had no bearing on the deal between the parties.

“The suggestion is not only an insult to Ms Milligan but also to Ms Dyer’s intelligence and integrity,” the public broadcaster said.

On Tuesday, Dyer released a statement in which she claimed Porter had “impugned my honesty and integrity”, saying it was the second time the former attorney general had made “defamatory comments” about me after he previously released a statement suggesting her action to restrain Chrysanthou was “part of an improper last-minute legal strategy”.

“Yesterday Mr Porter alleged that, after ‘coaching’ from Ms Milligan, I had destroyed important communications that may have had a bearing on his now discontinued action against Ms Milligan and the ABC. This is absurd,” she said.“There was nothing improper, illegal or sinister in my decisions to save or delete certain messages, decisions that were taken well before Mr Porter launched his now discontinued action against Ms Milligan and the ABC.“This afternoon Marque Lawyers sent a second concerns notice to Mr Porter in relation to his continuing defamatory comments of me.”The Guardian has not seen the concerns notice and has approached Porter’s lawyers for comment.