Why Obama’s tears are so revolutionary

Sometimes a historic moment arrives like an IMAX movie: a big, loud, jarring event that bends the arc of history.

Other times, though, it sneaks up on people. It seems modest at the time, but only later do Americans realize it marked a turning point — that something new had burst onto the national stage and the old rules no longer applied.

Some say yes, and that Obama’s tears were more radical than people realize. Most people know the backdrop: While announcing executive orders Tuesday to strengthen gun control laws, Obama halted as the cameras clicked. He tried to regain his composure, but then the tears flowed as he talked about 20 schoolchildren murdered by a gunman at Sandy Hook Elementary School in 2012.

Some commentators later said the moment was remarkable because Obama is known for his apparent Spock-like emotional detachment.

But the moment was more than remarkable; it was revolutionary, several historians and political scientists say.

“This is the most emotion an American president has ever shown on camera,” says Jerald Podair, an associate professor of history at Lawrence University in Wisconsin. “I can almost guarantee that when there is some sort of collage shown of this president’s presidency, this one moment will be in there.”

Obama didn’t just get weepy, Podair and others say. He introduced something new to American public life on three levels: spiritual, political and presidential.

He showed the ‘power of powerlessness’

Remember the Hollywood movie “Air Force One”? In the 1997 film, a group of Russian terrorists hijack the President’s plane while he’s aboard. But they messed with the wrong President. The commander-in-chief, played by Harrison Ford, takes back control of Air Force One, trading punches and getting into gunbattles with the terrorists. 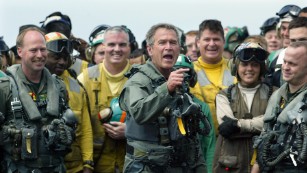 President George W. Bush displayed the “git ‘er done” attitude on an aircraft carrier in 2003, where he declared “Mission Accomplished” in Iraq.

The hit movie reinforced the notion of the action-hero President, a powerful man who knows how to “git ‘er done.” It’s why some historians talk with undisguised admiration about the mean streak of President Andrew Jackson, who once killed a man for insulting his wife; the frontier-honed strength of the towering Abraham Lincoln; or even the Machiavellian cunning of Lyndon Johnson,

who once said he couldn’t trust a man “unless I have his pecker in my pocket.”

But Obama was inspired by a new script when he wept openly before a White House audience, says Meg Mott, a political science professor at Marlboro College in Vermont.