Syria conflict: What is at stake in the battle of al-Bab? 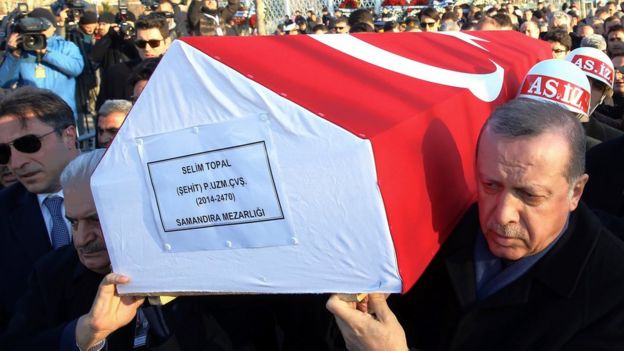 The Syrian town of al-Bab was rather insignificant until it emerged as a strategic stake between the Syrian president and his allies (Russia and Iran), Turkey, the Kurdish PYD (Democratic Union Party) and the so-called Islamic State group.

Situated just north-east of Aleppo, this small administrative centre of the larger al-Bab district has about 100,000 inhabitants, in addition to 50,000 people living in its suburbs.

Al-Bab was quickly occupied by rebels in spring 2012, and subsequently seized by IS during the winter of 2013-2014, which eliminated the other rebel factions. The town has since become an IS stronghold, home to many foreign jihadists and their families. It has served as the basis of IS’s offensives against the Syrian army and the rebels in Aleppo province.

Today, the city and its suburbs (Qabasin, Bizaa and Tadif) are almost surrounded. Operation Euphrates Shield forces, led by the Turkish army, are closing in from the north, while the Syrian army, which has quickly advanced over the last two weeks, moves in from the south.

The Russian air force has also bombed the IS positions south of al-Bab, leaving Turkish aviation to strike targets in the city itself. This suggests that rather than competition between the Syrian army and the Euphrates Shield forces for al-Bab, there is coordination and a shared area of influence.

The Aleppo-Manbij road, to the south of al-Bab, may function as the border between the Syrian Army and Euphrates Shield forces: al-Bab, Bizaa and Qabasin will be occupied by Turkey and Turkish-backed rebels, while the Syrian army will be satisfied with Tadif.

The objective of the Turkish intervention in northern Syria is to prevent the linkage of the Kurdish cantons of Afryn and Kobane. After regaining the htown of Manbij from IS in August, the Kurdish-backed Syrian Democratic Forces (SDF) had planned to next seize al-Bab and thus unify their territories. A race towards al-Bab began between the SDF and the Turkish army. This was halted in December when Turkey bombed the SDF, sending a message that their advance needed to stop.

Neither the Syrian regime nor Turkey had any interest in the Kurds taking al-Bab. The agreement between Russia and Turkey, in August 2016, joined by the Iranians, came at the expense of Kurdish interests. In the deal, Turkey also ceased aiding rebels in exchange for Russian neutrality in Turkey’s campaign against the Kurds.

East Aleppo was retaken by the regime soon after the conclusion of this agreement; al-Bab, it seems, will be left for the Turks.

Turkey is, however, experiencing difficulties in seizing the city. It has been making slow progress since mid-November 2016 and must send significant reinforcements because its Syrian proxies are not motivated by the battle for al-Bab. The primary objective of these rebel groups is to fight the regime of Syrian President Bashar al-Assad, not IS, and certainly not to collaborate with the Syrian Army in al-Bab.

But Turkish President Recep Tayyip Erdogan has no choice, as he needs to use the battle of al-Bab to prove the effectiveness of the Turkish army and its Arab proxies, if there is to be any hope of getting the United States to renounce a plan of making SDF its main ally in the offensive against IS in Raqqa, the group’s other stronghold in the country’s east.

Taking al-Bab is also an issue of domestic politics for President Erdogan, as it appeals to Turkish nationalism. If it succeeds, the Turkish army may finally turn towards Manbij, in order to repulse the SDF to the east bank of the River Euphrates.

President Assad is not pleased with Turkey creating a zone of influence in the north, less than 30km (20 miles) from Aleppo. Al-Bab was expected to have fallen to the Syrian army, which has been only 10km south of the city since January 2016. But the Russo-Turkish agreements seem to have decided otherwise.

What do Russia and Turkey foresee for the future? Will the Turkish army be allowed to advance even further south, and then head for Raqqa by the southern shore of Lake Assad?

This is difficult to imagine: the progression of the Syrian army south of al-Bab seems to indicate that it will next go towards Lake Assad to cut the Turkish route.

If President Erdogan wants to go to Raqqa he will have to attack the SDF, the US allies postpone the offensive on Raqqa. It is, therefore, in IS’s interest to prolong the battle of al-Bab, increasing the potential for Turkish-US discord, as its best strategy for protecting Raqqa.