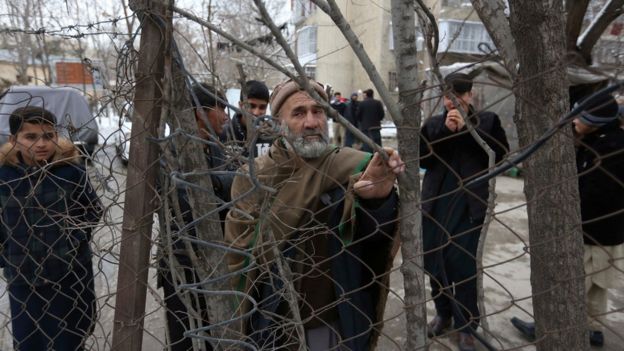 At least 20 people have been killed in a suicide bombing at Afghanistan’s Supreme Court in Kabul, officials say.

The government said 41 people were injured, 10 of them critically. All of the casualties are civilians.

The bomber targeted the car park of the court compound as employees were leaving to go home, reports say.

There was no immediate claim for the attack, which follows a number of deadly bombings by the Taliban and other militants in recent months.

The attack came hours after a senior district official in western Farah province was killed in a bombing claimed by the Taliban.

The attacker in Kabul was on foot and detonated a suicide vest, said Najib Danish, a spokesman for the interior ministry.

“My father and I were exiting through the parking lot when a huge blast hit us,” a witness told the AFP news agency. “My father is dead now. How will I live without him?”

The force of the explosion is said to have shaken nearby buildings, breaking windows and sending debris flying into the streets.

President Ashraf Ghani called the bombing a “crime against humanity and an unforgiveable act”.

In the past, Afghan judicial institutions, including the Supreme Court in Kabul, have been targeted by Taliban militants.

Last month twin bombings near the parliament in Kabul that were claimed by the Taliban killed more than 30 people and wounded many more.

The blasts took place during rush hour as staff were leaving the parliament complex.