ratcheted up as South Korea responds to its northern neighbor’s latest antagonism.

The South reactivated its propaganda speakers near its heavily fortified border with North Korea on Friday following Pyongyang’s announcement about its purported H-bomb test earlier in the week.

Seoul announced that, as of midday Friday local time (10 p.m. Thursday evening ET), it has resumed broadcasting propaganda using loudspeakers over the demilitarized zone, the heavily guarded buffer between the two Koreas 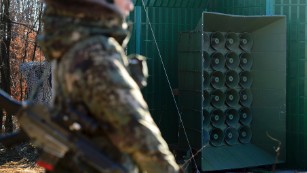 A South Korean soldier stands near the loudspeakers near the border area between South Korea and North Korea in Yeoncheon, South Korea, Friday.

It has also confirmed an increase in the level of cybersecurity defense.

North Korea considers the broadcasts tantamount to an act of war, and at times has responded to them with artillery fire.

Skepticism from international experts about North Korea’s claim to have conducted its first H-bomb test isn’t dampening spirits in Pyongyang.

In the North Korean capital, where the media is the only U.S. broadcaster operating, officials say the announcement has triggered an outpouring of national pride.

North Korean officials plan to take medias crew to a science center, where people close to the project will explain the science behind it

“Today in my conversation with the Chinese I made it very clear: That has not worked and we cannot continue business as usual,” he said.

Doubts over H-bomb claims
North Korea bragged Wednesday about the “spectacular success” of its first hydrogen bomb test, a defiant act that leader Kim Jong Un, in a statement read on state television, said would “make the world … look up to our strong nuclear country.”

Outside the hermit kingdom, however, Pyongyang’s hydrogen bomb claims are being treated with skepticism.

Fmr. Amb.: Kim Jong Un more dangerous and erratic than his father 04:42
Wednesday’s test yielded a blast of a similar magnitude to a previous North Korean test in 2013, according to Martin Navias, a military expert at King’s College London.

“We won’t know for another few days or weeks whether this was [a hydrogen bomb],” he said. “It doesn’t look like one; … one would have expected [the power] to be greater if it was an H-bomb.”

One analyst in Seoul cast doubt on whether enough material could be collected to ever find out definitively what Pyongyang has tested.

“After the third nuclear test [by North Korea in 2013] we couldn’t find any radionuclides… it means they can shield the test facilities very well,” says Jiyoung Park, a senior research fellow at the Asan Institute for Policy Studies.

Count Bruce Bennett, a senior defense analyst at the nonpartisan Rand research group, among the skeptics. He said North Korea has had trouble “mastering even the basics of a fission weapon,” so it’s a big leap to think it could create an even more complicated hydrogen bomb.

It’s possible North Korea tested a “boosted” weapon, one that uses a small amount of fusion to boost the fission process, but is not a hydrogen bomb.

The United States, South Korea, Japan and China are testing for airborne or ground radiation in the region, but more than 24 hours after North Korea announced a successful test, the country’s closest neighbors say they haven’t found any evidence of radiation.

A U.S. official told the media that an Air Force “sniffer” plane, a WC-135, may be sent to help measure for possible nuclear materials in the air.

North Korea says it successfully tested H-bomb
What can China do about nuclear North Korea?
Interactive: Nuclear weapons: Who has what?
7 key questions answered about the test
What is an H-bomb?
Official: U.S. seeks U.N. ‘resolution with teeth’
How North Korea’s nuclear program went from threats to reality
Timeline: How North Korea went nuclear
2016ers slam Obama, Clinton over nuke test
The Japanese Nuclear Regulation Authority, which is strengthening its monitoring activities, and the Japan Chemical Analysis Center, which is analyzing dust samples collected by the country’s Air Self Defense Force, said “there was no particular change” in environmental radiation levels, a finding echoed by South Korean monitors.

China’s Ministry of Environmental Protection, which was monitoring soil samples near its border with the North, also reported no change in radiation levels early Thursday.

According to Norsar, a Norway-based group that monitors nuclear tests, this test took place deeper underground, so it would be harder to monitor radiation and thus determine the type of weapon tested.

The underground test, which happened at 10 a.m. (8:30 p.m. ET Tuesday), corresponded with a magnitude-5.1 seismic event centered 12 miles (19 kilometers) east-southeast of Sungjibaegam, according to the U.S. Geological Survey.

Norsar said that based on the seismic readings, the event was equivalent to less than 10,000 tons of TNT, smaller than those of the atomic bombs used on Hiroshima and Nagasaki, and far less than thermonuclear weapons that typically are as potent as millions of tons of TNT.

It’s important to know specifics about the nuclear test because it will help the rest of the world ascertain how far along North Korea is in the process of developing nuclear weapons, according to Joe Cirincione, president of Ploughshares Fund, a foundation that focuses on global security.

“If you allow them to continue to test, they will eventually perfect their weapons and they may even get a true hydrogen bomb that would be 100, 1,000 times more powerful than the devices that have exploded so far,” he said.

READ MORE: The H-bomb: What is it? Who has it? Why it matters

After Wednesday’s meeting, the council, which includes China, Russia and the United States, together condemned the test as a “clear violation of (past) resolutions … and of the nonproliferation regime.”

Past U.N. measures included arms and luxury good embargoes, a freeze on overseas financial assets and a travel ban. None of them have so far stopped North Korea from continuing its nuclear program.

North Korean government officials told the media, who is in Pyongyang, that they are not afraid of more sanctions; they said that they’ve lived for years with the crippling measures levied against them and are prepared to tighten their belts even more.

Meanwhile, U.S. President Barack Obama spoke to the leaders of South Korea and Japan, who both joined the President in condemning the test. Obama reaffirmed the United States’ defense commitments to both of its regional allies.

South Korean President Park Geun-hye’s office added that the two leaders agreed “there should be a corresponding price for this nuclear test.”

A birthday present for Kim?
Kim Jong Un’s birthday is believed to be on Friday; could that have anything to do with the timing of the nuclear test?

“I certainly think that’s part of it,” said Victor Cha, the former director for Asian affairs for the National Security Council. “It’s about show, but it’s also about very hard-core security threats.”

Who is Kim Jong Un?

Who is Kim Jong Un? 01:57
The birthdays of former North Korean leaders Kim Il Sung and Kim Jong Il, the current leader’s grandfather and father, are celebrated with pomp and circumstance in the country; Kim Jong Un’s presumed birthday has been much more low-key during his reign.

“There’s a lot of speculation why that’s the case,” Lee Jung Hoon, professor of international relations at Yonsei University in South Korea, told the media last year. “Kim could be trying to put out this image as a humble guy, that he’s not extravagant.

In previous years, Kim has distributed sweets to children on January 7, something his grandfather and father were known to do on their birthdays.

The timing could be significant for another reason: In May, the country will hold the Seventh Workers’ Party Congress, the first meeting of its kind since 1980.

The official reason for the congress given by state media is that it was “reflecting the demand of the party and the developing revolution.”

But the meeting could be an attempt to bolster the perception that Kim has a stable hold on power, said Yang Moo-jin from South Korea’s University of North Korean Studies.

A successful nuclear test would send a powerful message to Kim’s domestic audience and the ruling party.

A heavily militarized state
What weapons does North Korea have?

With its secrecy and seclusion, us-against-the-world perspective and the fact it doesn’t play by traditional rules, North Korea was already unpredictable before it began experimenting with nuclear weapons and missile technology.

In spite of severe economic stagnation, North Korea has put much focus on its military, carrying a huge standing army of 1.2 million plus 7.7 million reservists, more than a third of the country’s 25 million people.