Russian plane crashes in Sinai,Egypt killing all 224 people on board

The cause of Saturday’s Russian jetliner crash in Egypt’s Sinai Peninsula still is unknown, but it is most likely due to a technical failure and there is no evidence of any terrorist action, Egyptian Airports Co. chief Adel Al-Mahjoob told the Media Arabic on Saturday. The Airbus A321 had a routine check before flight, showing everything was OK to proceed, Al-Mahjoob said.

The plane had departed the Red Sea resort of Sharm el-Sheikh, near the southern tip of the Sinai, on a flight to St. Petersburg, Russia. The plane vanished from radar 23 minutes into the flight, at 6:20 a.m. local time.

Egypt has been battling insurgents in the Sinai who are aligned with the terrorist group ISIS. But it is not known that that this played any role in the crash.

Among the significant, if very preliminary, pieces of information to emerge Saturday were these:

• The plane was flying at 31,000 feet when it disappeared from radar screens, the Egyptian civil aviation ministry said.

• Russia 24, a state-owned news channel, and other Russian media outlets are saying the pilot reported technical problems and requested a landing at the nearest airport before the plane went missing. Officials have not corroborated those reports.

• Russia 24 also quotes the FlightRadar 24 website as saying the plane was descending at a rate of 1,800 meters per minute, or 67 mph, before radar contact was lost.

• Weather in the area was clear.

• The plane, Kogalymavia Flight 9268, was an Airbus 321, Russian state media reported. The airline is commonly known as Metrojet.

The site of the crash is reported to be mountainous. Still, Egyptian rescue crews made their way there, and officials said 15 bodies were being flown to Cairo, the Egyptian capital. 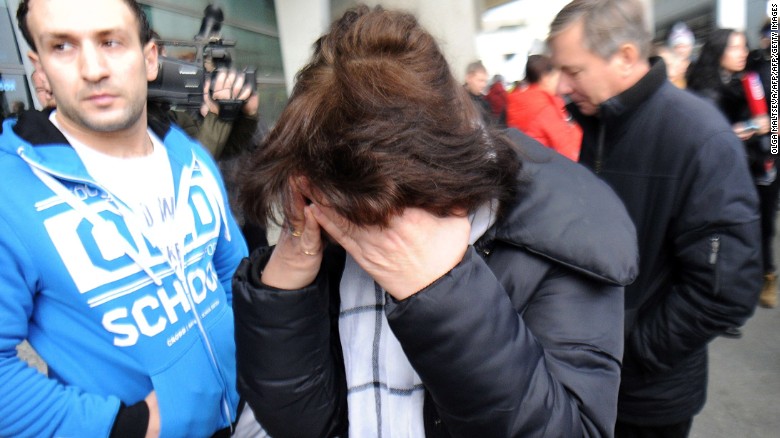 Relatives react at the St. Petersburg, Russia, airport after news of the crash.

The Northern Sinai medical department declared a state of emergency, according to the Al-Ahram newspaper. The Egyptian Prime Minister’s office reported that 50 ambulances have been dispatched to the area, which is mountainous.

And the Prime Minister, Sherif Ismail, met with ministers and security officials as the cause of the remained a mystery. The most dangerous parts of any flight are the takeoff and landing; it is unusual for a plane to fall from the sky at cruising altitude.

Russian President Vladimir Putin ordered Prime Minister Dmitry Medvedev to open an investigation into the crash, the Kremlin said. And the president declared an official day of mourning Sunday for the victims. 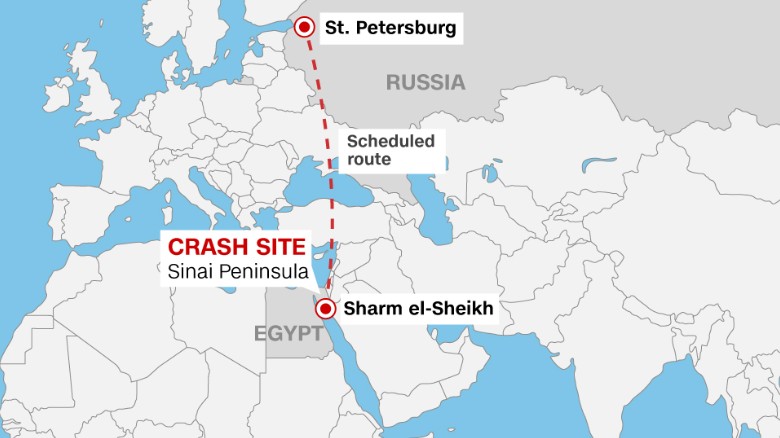 The Russian emergency ministry said it was sending five planes to the area to help with possible rescues and the investigation. And Russia opened a hotline for relatives, many of whom gathered at the airport in St. Petersburg, where they had expected their loved ones to arrive.

The crash site is in the northern part of Sinai, near a town called Housna — 300 kilometers (185 miles) from the Red Sea resort of Sharm el-Sheikh, the Egyptian Prime Minister’s office says Egyptian air force planes have spotted the crash site from the air, officials say.

Airbus, the plane’s maker, issues a statement on Twitter: “We are aware of the media reports,” the tweet reads. “Efforts are now going towards assessing the situation. We’ll provide more information as soon as available.”