The Olympics have reached a transitional point, midway through the program, where one marquee event — swimming — ends and another — athletics — begins.

Where the world goes from the excitement of watching Michael Phelps wreck medal records to the fervent anticipation of watching Usain Bolt beginning his campaign to write his own history.
Phelps closed out his Olympics career Friday with an impressive leg in the US’s win in the 4×100-meter medley relay.
His incredible legacy culminating with a 28th medal, 23 of which are gold — more than all but 39 countries.
“It’s been an honor to be on two Olympic teams with him. Last time was his last, this team is his last, so I get to say I was on Michael Phelps last Olympics two times which is cool, maybe there’ll be a third time,” US phenom Katie Ledecky said.
Phelps, who has swum in five Olympics, said no. His swimming career is over.
“It’s not the end of a career, it’s the beginning of a new journey,” he told NBC.
Michael Phelps: How swimming legend regained his ‘immortality’
For clarity’s sake, there is one more set of swimming events, but the marathon (10 kilometers) events are set in the water off Copacabana Beach.
For Bolt, the day was the start of his attempt to become the first man to win the three track and field sprint events — the 100 meters, the 200 meters and the 4×100 meters relay — in three Olympics.
The 29-year-old came into the Olympics having missed the Jamaican national championships with a bad hamstring.
All seemed well Saturday. Despite a rough start, he still ran 10.07 to win his qualifying heat in the 100.
Here are other memorable moments from Saturday’s action:
Elaine Thompson: Jamaican wins women’s 100m gold at Rio 2016 Olympics

Another historic moment for a US woman

These Games have been full of milestones for women representing the United States and Ibtihaj Muhammad is the latest to achieve a notable first.
The 30-year-old from Maplewood, New Jersey, became the first US athlete to wear a hijab and win an Olympics medal.
Muhammad and her three teammates won bronze in the women’s team saber event, downing Italy by a comfortable 15 points. Muhammad drew her first match 5-5 and won her second 5-3.
Teammate Mariel Zagunis became the first US fencer to medal at three Olympics.
View image on Twitter 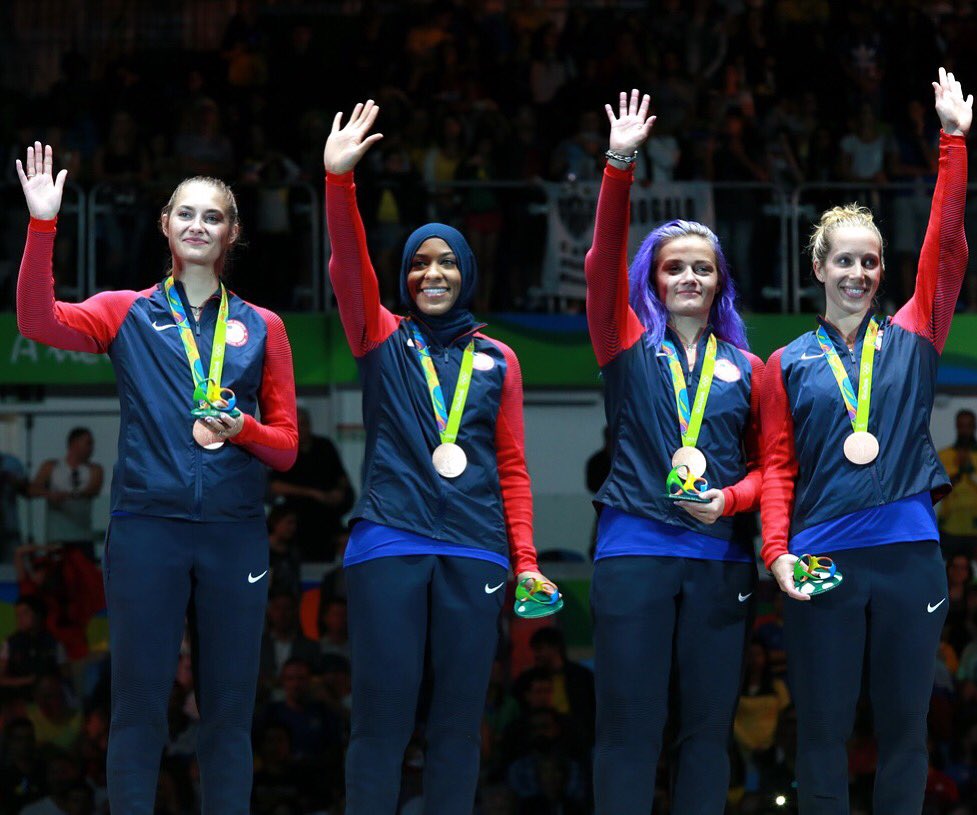