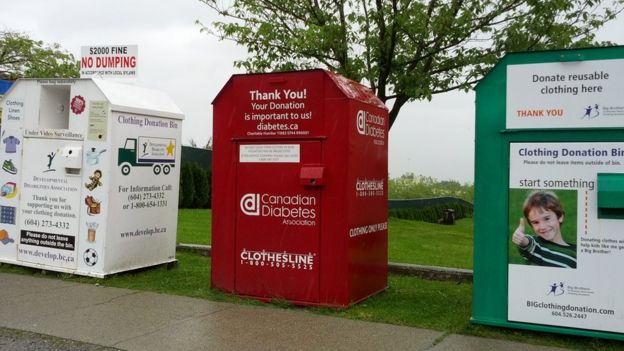 A 56-year-old Pennsylvania woman has died after her arm became trapped in a charity donation bin.

Judith Permar was dropping off clothes into the metal structure when a step stool she was using gave way and she was left hanging.

Her left arm and wrist were broken and she spent more than six hours outside in the cold, a coroner said.

A combination of trauma injuries and hypothermia caused her death on Sunday, found a post-mortem examination.Mrs Permar, who was said to be short, was found with her feet suspended above the ground, investigators say

It is thought she became stuck at around 02:00 local time while delivering the clothing near her home.

She was pronounced dead at the scene in the town of Natalie.

Her black Hummer was nearby with its engine still running.

He said she died as a result of “blunt force trauma with or without hypothermia due to left arm entrapment”.

On Facebook, her daughter Angela Minnig, described her as a “fun-loving person”.

Mrs Permar leaves behind a husband, four children and four grandchildren, according to an obituary in the Standard Journal.