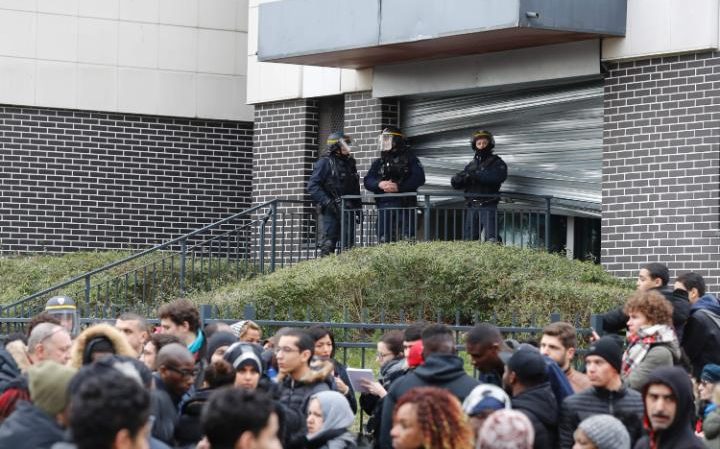 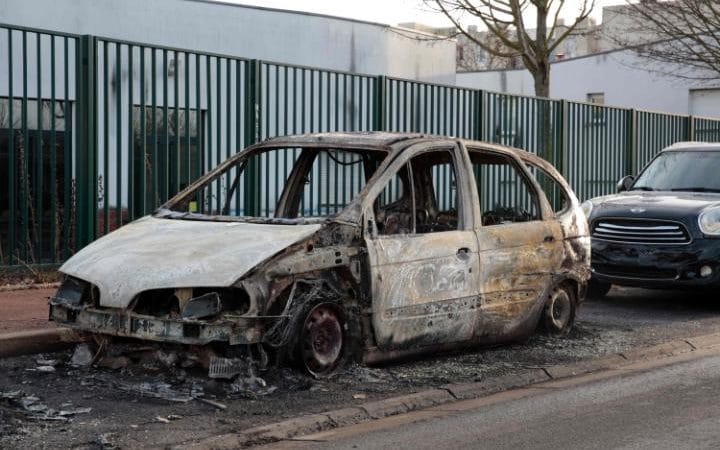 Rioters burned dozens of cars and set fire to a nursery school in the poor northern suburbs of Paris in the latest night of unrest sparked by the arrest of a young black man by officers who have since been charged with  beating and raping him.

Police arrested 17 people in the disturbances that hit several different areas in the same suburbs where riots by disgruntled youths of immigrant origin began in 2005 and spread across the country.

President François Hollande on Tuesday evening went to visit the young man who is recovering in hospital after his allegedly violent arrest last Thursday in Aulnay-sous-Bois, and stayed for half an hour at his bedside.

The 22-year-old victim, identified only by his first name, Theo, called on people in the suburbs to remain calm and not to take to the streets, according to the president’s aides.

But that call went unheeded, and the suburbs saw their fifth consecutive night of unrest following his arrest, when he was allegedly sodomised with a police officer’s baton during an identity check.

The unrest began on Friday night and by Wednesday had spread to several suburbs surrounding Aulnay-sous-Bois, which itself was relatively calm on Tuesday.

As well as damaging the nursery school and a car salesroom, youths also used a shopping trolley full of petrol bombs in their attacks on Tuesday night, police said.

“For the moment we’re talking of very violent but isolated standoffs,” said Luc Poignant from the SGP police union.

The man’s allegedly brutal arrest has again thrust the issue of policing in France’s immigrant suburbs into the spotlight. Officers say that they are often targeted there by gangs and drug dealers.

Many youths in those suburbs say they are often humiliated by police and are constantly stopped and asked for their identity papers.

The 2005 riots, in which 10,000 cars and 300 buildings were set on fire, prompted then interior minister, Nicolas Sarkozy, to declare a state of emergency.

The unrest is playing out against a backdrop of growing political uncertainty in France, with support growing for far-right leader Marine Le Pen and conservative Francois Fillon hit by accusations his wife was paid by the state for a fake job.