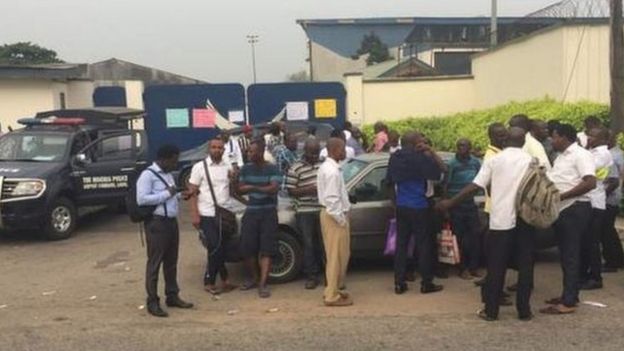 The Nigerian government has announced a takeover of the country’s biggest airline – Arik Air – to prevent it going bust. But this is just the latest example of problems in Nigeria’s aviation industry, reports the BBC’s Martin Patience from Lagos.

The government agency (Asset Management Corporation of Nigeria) now responsible for supervising the airline said the decision was made to “instill sanity in the country’s aviation sector and to prevent a major catastrophe.”

Customer service at Arik Air is at times non-existent. When the airline cancels a flight, most of the time its ground staff flee rather than deal with the fallout from irate passengers.

As the company’s troubles mounted at the end of last year, 70% of its international flights were delayed.

The firm’s staff bear the brunt for an airline that even by Nigerian standards is a byword for utter dysfunction. Last month the company was forced to issue a plea for passengers not to attack its employees.

How to survive the chaos

As Nigeria’s biggest airline, the government decided that it could not allow the company to collapse.

But to fly Arik often means never getting off the ground.

I was at Enugu airport when I was told my flight was cancelled. The man beside me at the check-in desk just shook his head – all his flights had been cancelled for the past two days.

First, find the most reliable airline and stick with it. And, if possible, take the first flight in the morning as it’s normally guaranteed to go on time (give or take an hour.)

Delays become compounded throughout the day as most airlines operate a shuttle service. So a good bet is that a mid-afternoon flight will probably turn into early evening flight. Passengers normally only miss their flight if it actually leaves on time.

Nobody wants to spend too much time at the airports here. Port Harcourt was named the world’s worst in 2015.

Generally speaking, though, I’ve always felt pretty safe on flights apart from after a rocky landing when several of the overhead luggage bins burst open.

To be fair to the airlines, Nigeria is not the easiest place to operate. International carriers face huge issues repatriating their profits as they can’t get their hands on dollars because of Nigeria’s current economic crisis.

The dollar shortage has also led to aviation fuel shortages causing massive disruption in the past few months.

The latest major inconvenience facing the traveller to Nigeria is the closure of Abuja’s airport for six weeks starting from next month while major repairs are carried out on its runway. At least one airline has damaged its landing gear on the pot-holed tarmac.

With the capital’s only airport shut down, the government is going to reroute flights to an airport in the nearby city of Kaduna.

The small airport there currently handles just 300 passengers a day compared to the 5,000 who pass through Abuja’s terminal. Many predict chaos.

Travelling to the capital from Kaduna will also involve a two-hour journey along a road that has been hit by a spate of kidnappings. The government is promising to put on extra security.

Unsurprisingly, several international airlines have already announced they will not being flying into Kaduna, although direct flights to Lagos, Kano or Port Harcourt will continue.

There are, however, a few perks about air travel in Nigeria: Free snacks onboard; unbelievably cheap excess baggage and the fact that you can board with as much carry-on luggage as you can actually carry on.

Also, during a year’s travel in Nigeria, my bags have always arrived on time, which is more than I can say for British airports.

And despite the immense frustrations, I frequently strike up conversations with complete strangers.

Delayed Nigerians can make for great company while waiting at the airport.