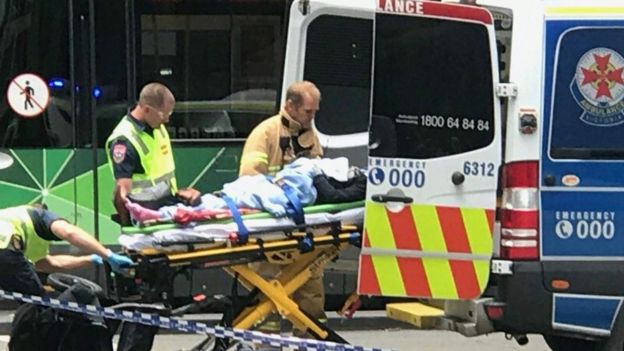 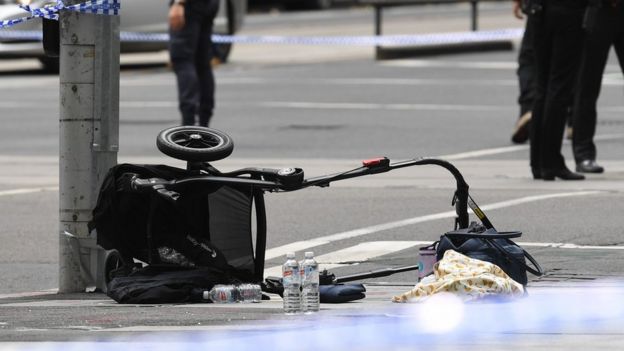 Four people, including a young child, have died after a car deliberately hit pedestrians in central Melbourne, police say.

At least 29 people were injured, among them a baby who is in a critical condition after the car hit a pram.

Police say they rammed the car, shot the driver in the arm and arrested him.

They say the incident was not terror-related, but is believed to be linked to a stabbing in the south east of Melbourne early on Friday.

Footage broadcast on local media captured moments before showed a maroon car driving in circles, with the driver leaning out of the window, in front of Flinders Street railway station.

A witness told the media she saw pedestrians try to get out the way as the car mounted a footpath.

“It hit a few people there outside the offices and convenience store and sent them flying into the air, then kept driving,” the witness said.

“It hit some more further up the path. I didn’t know what was happening at first. People were screaming and there was a lot of sound and dust – I thought a building was coming down.”

Another witness, Sharn Baylis, estimated the car to be travelling at 60km/h (37 mph) “in a straight line”.

“It was such an enclosed busy area,” she told ABC.

Witness Maria Kitjapanon told Melbourne’s Age newspaper that the car was rammed by a police car and that about 10 police surrounded the car, with guns drawn, and fired into the car.

“Then they dragged someone out via the passenger side, then all 10 of them sat on top of him,” she said.

Police say the same man was involved in an an attack on his brother in the early hours of the morning in a Melbourne suburb.

It is believed he then went on to take a woman hostage in the car. She was released before the driver proceeded to the city centre and started to hit pedestrians.

The police say the man is known to them, and has a long history of family violence, drug issues and mental health problems.

He was also charged at the weekend in relation to an assault.

The four people who died have not been named, but police say that among them were a man and woman in their 30s, and a young child, none of whom were related to each other.

The injured baby was three months old. Also among the injured was a two-year-old who is in a serious condition, and children aged nine and 12.