Mali attack: Why the country is an insurgent hotspot 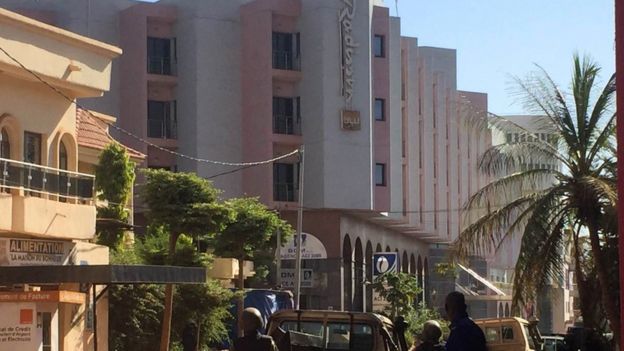 While most global attention has been focused on Nigeria, Mali has been West Africa’s other insurgent hotspot in recent years.

It is threatened by various armed groups – from Ansar Dine, which is linked to al-Qaeda in the Islamic Maghreb (AQIM), to Touareg separatist rebel groups.

The lawlessness in Libya after Colonel Muammar Gaddafi was toppled in 2011 led to a spread of weapons across the Sahel region of northern Africa, which fell into the hands of such groups and fuelled unrest in the region.

In 2012 the handling of the Touareg rebellion prompted some army factions to stage an uprising, sparking a civil war.

Jihadist groups took advantage of the situation and took control of the north of the country, imposing strict Islamic law.

The resulting fighting needed the intervention of French forces to push away the militants and regain much of northern Mali.

But the jihadists are still active and have carried out numerous attacks across the country.

The most prominent group is Ansar Dine, led by Iyad Ag Ghaly. The group is linked to AQIM and has vowed to destabilise the Sahel region. Ghaly recently called for attacks on France and its interests in Mali.

The group implemented Sharia law in towns it captured during the 2012 uprising, including the ancient city of Timbuktu.

It is linked with Ansar Dine and just last week, carried out an attack on a military checkpoint in the region of Djenne, a town 500km (310 miles) north-east of the capital Bamako.

Its leader has called for continued attacks on the government.

Last week, the Malian authorities said that information from members of the public had led to the arrest of one of the group’s leading financiers during an army operation in the central region of Mopti.

AQIM has a much larger reach, operating across North Africa and the Sahel, including Mali.

One of its offshoots, al-Murabitoun, says it carried out an attack on a hotel in the central Malian town of Sevare in August, during which at least 13 people were killed.

Both AQIM and al-Murabitoun have said they were behind Friday’s attack on the Radisson Blu hotel in Bamako.

Al-Mourabitoun is led by Mokhtar Belmokhtar, a prominent jihadist in North Africa, notorious for the January 2013 siege on a gas facility in Algeria during which at least 37 hostages were killed.

Boko Haram, the group linked to Islamic State and based in the Lake Chad Basin, has also been known to have links to Malian extremist groups, receiving training and weapons from some jihadists in the north of the country.

This security situation in Mali has prompted counter-insurgency measures by the country’s military forces including just north of the capital Bamako. France has also maintained its involvement.

It has 3,000 forces operating in the Sahel as part of an anti-terror operation known as Operation Barkhane.

In response to the latest Bamako attack, France is also deploying its Special Forces unit to Bamako, including the National Gendarmerie Intervention Group (GIGN) involved in countering the recent Paris attacks.

Mali’s neighbours like Burkina Faso and Ivory Coast have expressed concerns about the spread of jihadist fighters and have stepped up the security operation on their border areas in an attempt to keep the militants out.

The attack on the Radisson Blu Hotel in Bamako appears to have been well co-ordinated and carried out by a group that had studied the layout of the building and knew the hotel normally has a large number of international guests.

This was a group that had strong a local knowledge but also a wider agenda to grab global headlines.