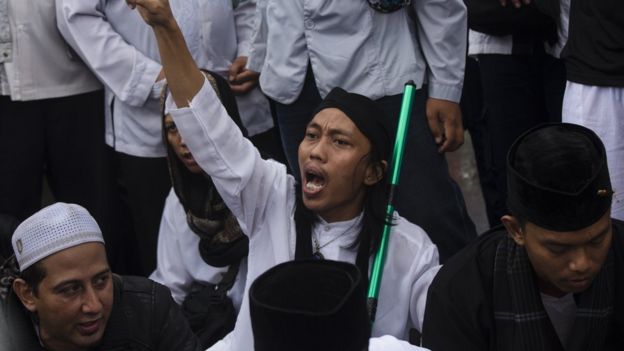 Tens of thousands of Indonesians have gathered in Jakarta to urge people to vote for a Muslim candidate to be the capital city’s next governor. 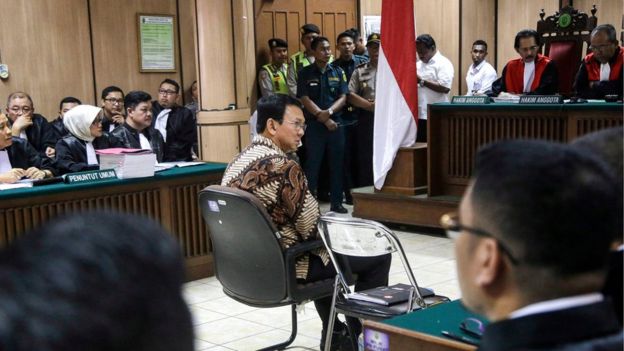 The incumbent, Basuki Tjahaja Purnama, known as Ahok, is an ethnic Chinese Christian currently on trial after being accused of insulting Islam. 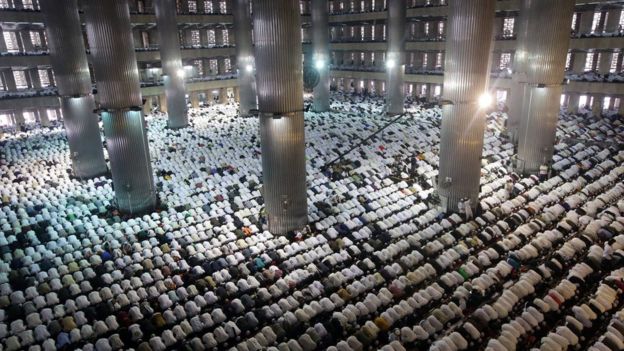 Despite the court case, Mr Purnama is still expected to win Wednesday’s vote.

The campaign against him has been led by Muslim hardliners, stoking fears of growing religious intolerance.

Crowds gathered for mass prayers around the city’s Istiqlal Mosque on Saturday, urging people to cast their ballots for Muslim leadersSupporters of several Islamic groups held posters with messages such as “I’d prefer if my leader is a Muslim” and “It is forbidden to pick an infidel leader”.

The action follows big protests against Mr Purnama in December and a rally that turned violent in November, leaving one man dead and dozens of police and demonstrators injured.

Mr Purnama became Jakarta’s first non-Muslim governor for 50 years and the first ethnic Chinese to hold the position when he took over from Joko Widodo – now the president – in 2014.

He won popularity for his no-nonsense style, as well as his stances against corruption and in favour of public transport and greater access to healthcare and education.

But some Islamists rejected him from the outset because of both his religion and ethnicity.

His position has been undermined by the court case against him, with prosecutors arguing that he insulted Islam by misusing a Koranic verse.

Mr Purnama had said that Islamic groups using a passage of the Koran to urge people not to support him were deceiving voters.

The verse is interpreted by some as prohibiting Muslims from living under the leadership of a non-Muslim.

Mr Purnama insisted his comments were aimed at politicians “incorrectly” using the verse against him, not at the verse itself.

Rights groups say the authorities have set a dangerous precedent in which a noisy hardline Islamic minority can influence the legal process.

If none of the contenders gets more than 50%, a run-off election between the two top candidates will take place in April.

Christians represent less than 10% of the country’s 250 million people, and ethnic Chinese about 1%.

In 1998, a wave of anti-Chinese sentiment led to mobs looting and burning Chinese-owned shops and houses, leaving more than 1,000 people dead.

However, Muslims in Indonesia are largely moderate and the country’s largest Islamic organisation, Nahdlatul Ulama, had advised its members not to take part in the recent anti-Ahok protests.