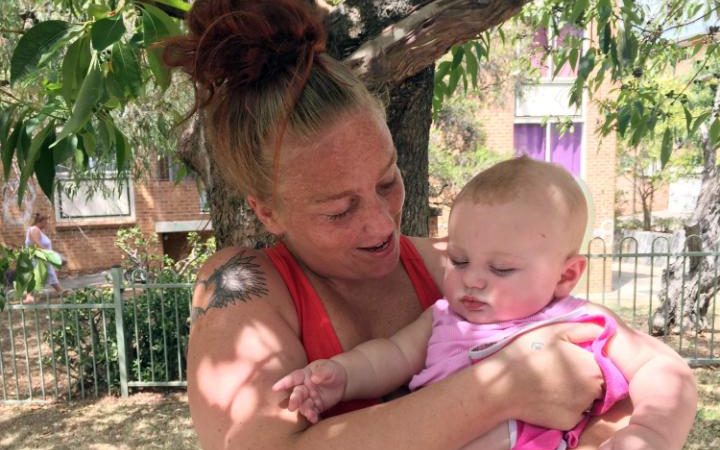 Amother in a burning apartment building in Australia was forced to drop her baby from a second-floor balcony to her neighbours, who caught the seven-month-old “like a football”.

Kristy Morton and Luke Hayes woke on Tuesday to discover that the apartment below them was on fire and realised their only escape was via the balcony.

Fortunately, two residents of neighbouring building had sensed the danger and rushed to assist.

We caught her like a football, with our arms out and then hauled her back inTony Finn

“My first thought was I had to save my daughter,” she told The Blacktown Sun.

“My heart was jumping out of my chest. I wanted to jump out with her. I’m just glad she’s ok.”

Ms Morton and Mr Hayes then climbed to safety down a ladder which the neighbours had placed against a wall.

Mr Finn said he was “a bit shaky” as he waited to catch Neveah but the baby seemed to have little problem making the leap.

“We caught her like a football, with our arms out and then hauled her back in,” he said.

In the Australian football League (AFL), which shares similarities with rugby and American football, players can catch a ball with both hands in a distinctive move known as a “mark”.

Mr Finn added: “She was smiling like an angel. She loved it. I’m still a little nervous, still a bit shaky. I just wanted to make sure everyone was ok.”

He added: “I wouldn’t be called a hero. Anyone in the same situation would have done the same thing.”

Mr Finn was one of four people taken to hospital and was treated for smoke inhalation but was later released.  Neveah and her parents were all uninjured.

“It was extraordinary, but people do extraordinary things when faced with those sort of situations,” said Graham Kingsland, from the New South Wales state fire and rescue service.

Police said the fire was not suspicious.