Famine in Syrian city of Madaya ‘the tip of an iceberg’

Evidence of an unfolding famine in the Syrian city of Madaya continues to mount, with the international rights group Amnesty International publishing accounts of people trying to survive on boiled water and leaves.

Except that now that it’s winter, the leaves are gone.

Even more chilling is the idea that Madaya may not be the exception in Syria today, after nearly five years of civil war: It might be representative of an ongoing catastrophe of larger proportions.

“These harrowing accounts of hunger represent the tip of an iceberg,” said Philip Luther, the Middle East and North Africa director for Amnesty International. “Syrians are suffering and dying across the country because starvation is being used as a weapon of war by both the Syrian government and armed groups.”

Luther accused both sides of “toying with the lives of hundreds of thousands of people,” and noted that starving civilians as a tactic in warfare is a war crime.

Some help is on the way, possibly in just a few days.

A convoy from the U.N. World Food Programme, International Red Cross and Syrian Arab Red Crescent is set to deliver enough aid to sustain 40,000 people for a month, according to WFP spokeswoman Abeer Etefa.

But an aid worker close to the talks on the situation in Madaya told the media that this assistance won’t be sent by Sunday but “hopefully” it will on Monday. This is due to the complexity of setting up the deliveries over such long distances.

If and when it does arrive, ideally the delivery will mark a rare positive development not just for Madaya, a town of 40,000 northwest of Damascus that’s been under siege since July, but all of Syria.

A country about 1½ times the size of Pennsylvania, Syria has been wracked since March, 2011, by one of the modern era’s most brutal civil wars.

Major cities have been reduced to rubble. Hundreds of thousands of people are estimated to have been killed, and perhaps 4 million have fled the country, many grabbing only their babies and little else but the clothes on their backs.

‘Winter is here and the trees no longer have leaves’

As the report from Amnesty highlights, the good guys in this war are hard to find.

The regime of Bashar al-Assad stands accused of torture and murder. But prominent among the Assad regime opponents is the terrorist group ISIS, an organization of unparalleled brutality.

And now, it appears, people are starving, due to the tactics of both sides — people willing to see the country laid waste in their pursuit of power.

“The last time I had a full meal was at least a month and a half ago,” said a resident of Madaya named Louay, as quoted by Amnesty International. “Now, I mainly have water with leaves. Winter is here and the trees no longer have leaves, so I am not sure how we will survive.”

Louay was interviewed on January 7, as were a number of other residents of Madaya.

Um Sultan said she hears every day of someone too sick to leave the bed.

“My husband is now one of them,” she told Amnesty. “He can’t leave the bed, and when he does he faints. I don’t recognize him anymore; he is skin and bones.”

Help may be on the way. But it can hardly come soon enough.

A spokeswoman for the International Committee of the Red Cross told the media on Friday that the organization hoped to bring aid to the rebel-held town of Madaya, less than 50 kilometers from Syria’s capital, “in the coming days.”

“The convoy is still in preparation,” said spokeswoman Dibeh Fakhr. She said the Red Cross hoped also to deliver aid to the northern towns of Foah and Kefraya, which, unlike Madaya, are loyal to the Assad regime

“One short delivery will not be the solution,” Fakhr said. “What is needed is regular access.”

Food is available… but expensive

The situation in Madaya is said to be dire. Even when food is available, the prices are prohibitive.

Pleas for help on social media

Posts on Twitter and Facebook from people who say they live in the town beg the world for help. In one, a man speaks to the camera and breaks down. 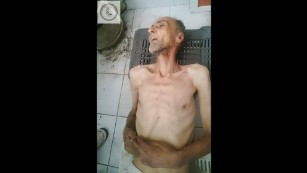 This video, which the media cannot independently verify, is one of dozens posted online by activists and residents in Madaya.

In another video, a child says he hasn’t eaten for seven days and wants to eat meat. In another, a mother says her daughter has not had milk for a month. Again, neither video can be independently verified.