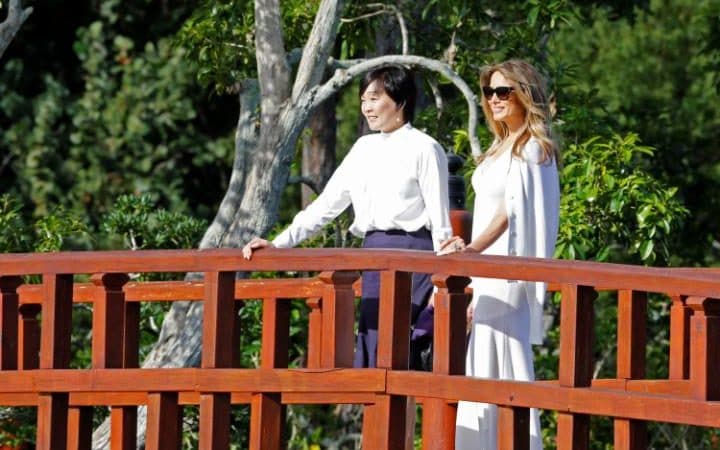 President Donald Trump declared the legal system “broken” on Saturday, as he promised to forge ahead with the battle over a travel ban which has come to define his fledgling presidency.

“So dangerous!” Mr Trump tweeted as he claimed that the majority of refugees allowed into the US since the court was halted by a legal challenge hailed from the seven “suspect” countries it affected.

The president spent the day playing golf at Trump National Golf Club in Jupiter, Florida, with Shinzo Abe, the Japanese prime minister, and Ernie Els, the former world No 1, while their wives visited a Japanese garden. Melania Trump’s excursion – oversized sunglasses firmly in place – marked the first time she had visibly done the “job” of first lady in the three weeks her husband has been president: on Friday she had left Akie Abe to visit a Washington DC school alone, in a surprising departure from standard White House protocol.

But while the first family relaxed, behind the scenes a concerted effort was being made to recover from a bruising series of events.

Mr Trump promised on Friday that he would be unveiling new plans to reinstate his travel ban as early as Monday.

The ban, signed on Jan 27, threw the travel plans of thousands of people into chaos a week before being blocked by a Seattle-based judge.

On Thursday Mr Trump lost an appeal to reinstate the ban – an executive order which halts travel from seven Muslim-majority nations, and stops the arrival of refugees.

His team are now scrambling to work out the next steps.

The president said on Friday “we’ll be doing something very rapidly having to do with additional security for our country”, and that details would be revealed next week.