In the ancient Iraqi Christian town of Bartella — recently liberated from ISIS — Christmas was celebrated for the first time in more than two years on Saturday.

It was an emotional return for members of Bartella’s displaced Christian community, who had been forced to flee when their hometown was overrun by the Islamist terror group. It was taken back from ISIS in late October.
Hundreds of Christians made the pilgrimage in buses on a gray, rainy Christmas Eve. They came mostly from camps for the displaced that have been set up in the city of Irbil.
Bartella is just 20 kilometers (12.5 miles) east of the ISIS stronghold of Mosul — where coalition forces still are battling thousands of militants.
As mass was celebrated Saturday, dozens of Iraqi and US security forces were on standby to protect worshipers at the historic, battle-scarred Mart Shmony Church. A security officer searching cars at a checkpoint said ISIS had been threatening to carry out attacks in Bartella. 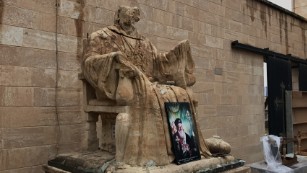 A religious statue vandalized by ISIS stands outside Mart Shmoni Church in Bartella, Iraq.
Even though volunteers have worked on the church for several days, evidence of the terror group’s brutal regime is everywhere. ISIS’ signature is written large — in scorched walls, charred books and broken glass. Bullet holes scar the church. The head of a statue and its hands have been smashed.
Outside, a big plastic Christmas tree provides a backdrop for commemorative group pictures and selfies. Emotions are mixed.
Hania Noah, an Iraqi Christian who traveled back to her home town with the group from Irbil could not hold back the tears as she stepped inside the church.
“I felt like I lost a family member when I saw the church this way. This is the church that I have been praying in for my entire life” said Noah. “But I am happy to be back. I am glad I am here to celebrate the birth of Jesus. It’s like I’m reborn again.”

In August, 2014, 52-year-old Noah and her five children fled her home as ISIS fighters marched toward the town. “It was midnight when we fled Bartella and left everything behind. I thought It was just a bad dream and soon I’ll wake up from it,” said Noah. She and her children have been living in a makeshift camp for displaced people in the Ankawa Christian neighborhood in Irbil since they fled their home.

The church’s own priest delivered another, more defiant message. 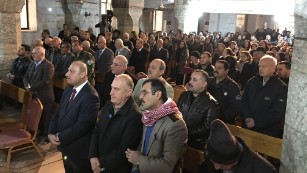 About 300 Iraqi Christians had traveled in buses, mostly from displaced camps in the city of Irbil.
“We are here to challenge the sons of darkness and this is why we held this mass here. ISIS are sons of darkness.
“This is a message to the entire world that we Christians … are the inherent component of this country and we are staying,” said Father Yaqub Saadi.
Worshipers started cheering and applauding as Saadi spoke.
In another corner of the church, several US soldiers were celebrating Christmas. They held candles and prayed. At the end of the service a new cross replaced one destroyed by ISIS.

Without hope ‘we are finished’

Seventy-six-year-old Nori Younani, who had lived his entire life in Bartella before ISIS came, said he was was almost in disbelief when the terrorists took control.
“I could never imagine this would happen. We have lived here for more than 1,000 years. We never thought we would be displaced. Our houses are destroyed. We wont be able to come back.” 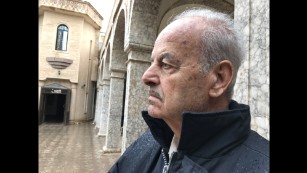 Nori Younani, 76, had lived in Bartella all his life before ISIS took control.
Younani said his three houses in the town were destroyed in the fighting. “I don’t feel safe to come back anytime soon, but I don’t want to die outside my town, my entire life is here,” he said.
Younani and his daughter, Saher, traveled from Irbil to celebrate Christmas. They also have been living in a makeshift camp for displaced people.
“Jesus will show us the right path, he will never forget his son,” he said.
“ISIS had brought down the cross and set it on fire but we are here again lighting our candles. We have to have hope in this life. If we don’t have hope then we are finished.”