Attackers raided a luxury hotel in Burkina Faso overnight, shooting some and taking others hostage in a siege that lasted hours and ended with dozens of people dead.

An al Qaeda-linked terrorist group claimed responsibility for the assault at Splendid Hotel — a popular meeting place for Western diplomats in the capital, Ouagadougou.

The attack began Friday night and dragged on under the cover of darkness. Security forces circled the perimeter to assess the situation before they stormed in hours later. 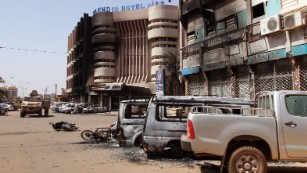 “Everyone was panicked and was lying down on the floor. There was blood everywhere, they were shooting at people at point blank,” said Yannick Sawadogo, who survived the siege.

Security forces entered the hotel early Saturday and freed 126 hostages, half of whom were hospitalized, according to Burkina Faso’s foreign minister, Alpha Barry.

Two French nationals were among the dead.

It was unclear whether either death toll included the four attackers — including two women — that Compaore said were killed.

Thibault said three attackers died, and none of them were women.

‘We could hear them talking’

Survivors described horrific scenes as the attackers paced and fired in the hotel Friday night.

“We could hear them talking and they were walking around and kept shooting at people who seemed alive,” Sawadogo told the media.

Sawadogo said he escaped through a broken window, and could barely see because of smoke.

Burkinabe forces scoured rooms at the hotel, looking for terrorists and any remaining hostages. Those rescued included a government minister, state media reported.

The West African nation’s forces received logistical support from American and French troops. Shortly after the forces stormed the hotel, the sounds of gunshots faded.

The attack in Burkina Faso appeared well-planned, with some of the attackers coming to the hotel during the day and mingling with guests, the foreign minister said.

When darkness fell, more attackers joined them, he said.

Before the hotel assault, they attacked the Cappuccino café across the street, which had about 100 people, according to the state broadcaster.

They then took off to the Splendid Hotel, where they seized hostages.

Witnesses said the attackers wore turbans and spoke a language not native to Burkina Faso, a former French colony.

U.S. forces helped with logistical support. The United States has about 75 military personnel in Burkina Faso, including 15 assigned to the U.S. Embassy, according to a U.S. defense official. An additional 60 help train and advise the French military in the nation.