With its reign of terror in the Middle East, its claim to have brought down a Russian passenger jet and now, the atrocities in Paris, ISIS has commanded global headlines as the world’s most dangerous terror group.

But another militant Islamist organization overtook ISIS to become the world’s deadliest terrorist group last year,according to a new report.

Boko Haram, the Islamic extremist group based mainly in Nigeria’s northern states, was responsible for 6,644 deaths in 2014, an increase of 317% from the previous year, according to the Global Terrorism Index, released Tuesday.

By contrast, ISIS, the terror group to which Boko Haram reportedly pledged allegiance in March of this year, was responsible for 6,073 deaths.

Between them, the two groups were responsible for more than half (51%) the deaths attributed to terrorism, in the deadliest year on record for terror, according to the report.

Internationally, deaths from terrorism experienced a “dramatic rise” in 2014, increasing by 80% from the previous year, according to the study by the Institute for Economics and Peace.

There were 32,658 people killed in terrorist attacks last year — nine times more victims than there were in 2000, it says.

Boko Haram, whose name means “Western education is forbidden” in the local Hausa dialect, gained international notoriety for its raids on schools, in which hundreds of girls have been kidnapped.

An estimated 276 teenage girls were snatched from a boarding school in Chibok in Nigeria’s Borno state in April of last year, sparking the #bringbackourgirls campaign on social media.

The group — whose elusive leader, Abubakar Shekau, has a $7 million U.S. government bounty on his head — has also pursued a ruthless campaign of bombing marketplaces throughout Nigeria.

The country was rocked by two such blasts within 24 hours this week, with at least 31 people killed Tuesday in the northeastern city of Yola, according to a local Red Cross official, and 15 killed in Kano, about 400 miles (645 kilometers) to the northwest, according to police.

An 11-year-old girl was a bomber in one of the attacks.

Boko Haram’s campaign of terror, combined with the rise of Fulani militants operating in the country’s central belt, has led to Nigeria experiencing the biggest year-on-year increase of deaths from terrorism ever recorded, with 7,512 fatalities in 2014, up more than 300% since the previous year.

Fulani militants, hailing from a pastoralist ethnic group engaged in conflict with farming communities, were responsible for 1,229 deaths last year, making them the world’s fourth deadliest terror group, according to the report.

Where is terror happening?

Iraq continues to be the country most impacted by terrorism, with 9,929 terrorist fatalities last year, the highest ever recorded in a single country, according to the report. 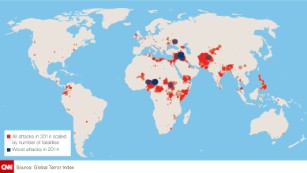 The next most affected countries were Nigeria, Afghanistan, Pakistan and Syria. Nearly four-fifths — 78% — of deaths from terrorism occurred in these countries, according to the report, although terrorism was spreading, with more countries recording attacks and deaths than previously

The number of countries experiencing more than 500 terrorism deaths increased from five to 11 in 2013. The six new countries on the list are Somalia, Ukraine, Yemen, the Central African Republic, South Sudan and Cameroon. The report adds that Ukraine entered the list because of the downing of Malaysia Airlines Flight 17 by a missile in a rebel-controlled area in the east of the country, killing all 289 people on board.

Of the attacks that did take place in the West, “lone wolf” attackers are the main perpetrators, causing 70% of all deaths since 2006.

How do we stop ‘lone wolf’ attacks?

The majority of “lone wolf” attackers are a mixture of political extremists, nationalists, racial, religious and white supremacists and, to a lesser degree, Islamic fundamentalists.

The report, which was compiled using data from the University of Maryland, says the global economic cost of terrorism last year reached an all-time high of $52.9 billion.

This cost was 61% higher than 2013, when the economic cost of terrorism reached $32.9 billion, and over a tenfold increase since 2000. The vast majority of the costs stem from injury and death.

“Terrorist activity is a significant driver of forced migration,” the report says. “Ten of the 11 countries most affected by terrorism also have the highest rates of refugees and internal displacement. This highlights the strong connection between the current refugee crisis, terrorism and conflict.”

What is driving terrorism?

Political violence and conflict are the two factors most closely linked to terrorism.

Between 1989 and 2014, 92% of all terrorist attacks took place in countries where state-funded political violence was widespread.

Since there are clear sociopolitical factors that foster terrorism, it is important to implement policies addressing these associated causes, said Steve Killelea, founder of the Institute for Economics and Peace. “This includes reducing state-sponsored violence, defusing group grievances, and improving respect for human rights and religious freedoms, while considering cultural nuances,” wrote Killelea.

The rise of ISIS has been significant. The flow of foreign fighters into Iraq and Syria since 2011 is the largest influx in modern times, with current estimates now ranging from 25,000 to 30,000 fighters from 100 countries. This flow of foreign fighters does not appear to be diminishing, the report says, with over 7,000 arriving in the first six months of 2015 alone.

While terrorism is undoubtedly a major concern for safety and security, the report also highlights the fact that global homicide accounts for more deaths annually than terrorism.

The global homicide rate is 13 times the global terrorism rate, with 437,000 people dying from homicides, compared with 32,658 from terrorism in 2014.