This week, Prime Minister Malcolm Turnbull has announced that Australia will participate in a postal plebiscite to gauge public opinion on the same-sex marriage debate.

A pleb-a-what (!?) you might ask. Don’t worry, you join the long line of Australian locals who are equally confused as to why they are participating in one and what impact their vote may or may not have on the country’s heteronormative marriage laws.

More on Forbes: These Asian Countries Are The Most Likely To Adopt A Gay Marriage Law

To somewhat stave off confusion here is a rundown on the rules of a plebiscite, why the Australian government is insisting on conducting one, why it has been perceived as controversial, and what the potential impact could be.

What is a plebiscite?

A plebiscite, put simply, is a nationwide vote to gauge public feedback on a political proposal.

This means that the results of a plebiscite are not legally-binding, unlike a referendum which has, in most instances, the power to alter the course of law.

Since Australia has opted for a postal plebiscite, participation is voluntary. Locals will not be penalized for failure to vote, which is usually the norm in Australia during elections or constitutional referendums.

Why is Australia having one?

The state of Australia’s marriage equality has long been a political sticking point for the incumbent Liberal Party.

In coalition with the Christian-valued Nationals, the Liberals have long opposed any proposed amendments to the current Marriage Act 1961 which stipulates that marriage is “the union of a man and a woman to the exclusion of all others.”

Two Liberal MPs have drafted a bill to bring about a vote on same-sex marriage, in the hopes that the issue would receive the support it needs to finally become settled law. However, despite this, Prime Minister Turnbull has expressed that he would not support a bill relating to gay marriage until there is a vote of the Australian people.

Hence, Australians who want to see change will need to participate in the plebiscite. 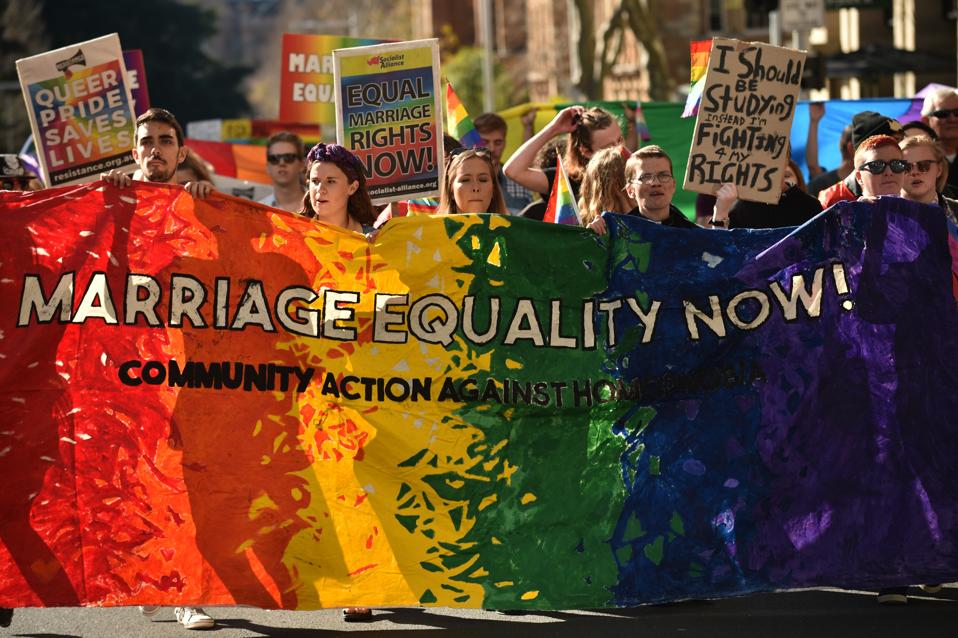 Why are many Australians opposed to the plebiscite?

Those not living on the sunny shores of Australia may perceive the plebiscite to be a harmless means to gauge public interest on a political issue. However, there are several controversies surrounding the plebiscite that have provoked outrage among locals.

First, is the sheer cost of the plebiscite. Boasting an estimated (AUD) $158 million price tag to facilitate — a figure which does not include campaign and other expenses —   the public vote is seen as an unnecessary expense.

This expenditure becomes even more poignant when one considers that public polls have previously been conducted in Australia on the same-sex marriage issue. Readily available to the Australian public, for a fraction of the price, their results have already displayed overwhelming support for marriage equality.

Second, as stated, the outcome of the plebiscite is not legally-binding. Voting will not change the High Court ruling that named the federal government as the sole body responsible for making amendments to the existing Marriage Act. As such, the plebiscite becomes a fruitless exercise.

Third, Australia has long prided itself on being a society that values “equality of opportunity for individuals, regardless of their race, religion or ethnic background.”

Also on Forbes: Fewer Teens Die By Suicide When Same-Sex Marriage Is Legal

If this is the case, it appears that the incumbent Australian government has taken the stance that equality may be for some, but not for others, marginalizing Australia’s LGBT community.

Lastly, the government has also acknowledged that there will be no legal protections for the LGBT community during the plebiscite campaign period. This means that lobbyists on both sides of the spectrum are free to distribute campaign material of their choice. Marriage equality activists fear this could equate to deceptive and hateful material aimed at Australia’s gay community.

What could the impact be?

The Australian government has promised that, in the event of a “yes” vote, it will allow a private member’s bill — or a proposed amendment to the law that can be brought forward by any member of the parliament —to be introduced during the final sitting fortnight of 2017.

If the the results are a resounding “no,” Prime Minister Turnbull has stated that no bill will proceed.

That is, a “no” vote will be binding, while a ‘”yes” vote will place amendments to the existing marriage act under consideration.