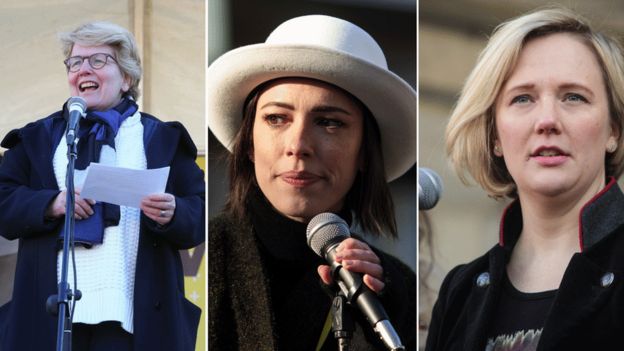 Thousands of protesters have taken part in a Women’s March in London as part of an international campaign on the first full day of Donald Trump’s presidency.

They marched from the US embassy to Trafalgar Square – as part of UK-wide rallies to highlight women’s rights.

Organisers said up to 100,000 people took part in London, although that has not been independently verified.

It comes on a day of global protests, with the biggest demonstration taking place in the US capital, Washington DC.

Hundreds of thousands of protesters have taken to the streets of Washington – one of more than 600 rallies taking place worldwide on the new US president’s first full day in office.

Protesters left the US embassy, in London’s Grosvenor Square, shortly after midday and chanted “build bridges not walls” as they made their way along Piccadilly.

London organisers announced on stage that between 80,000 and 100,000 women and men had taken part in the rally, but police have not given an independent estimate.

Eleanor Hallam, 26, was among those marching in London. She said she was there “out of solidarity for all the women and other groups marginalised by Trump’s politics”.

Hannah Webb, 26, who travelled from South Wales to London, added: “When social media feeds you fear, it feels good to march together shoulder to shoulder.”

Nic Bash, an American now living in London, said he had attended “because if you don’t like something you have to try and change it”.

Politicians, activists and celebrities took to the stage to address the crowds in Trafalgar Square.

Ms Toksvig, who co-founded the Women’s Equality Party, said: “I am here today because I believe in a woman’s right to choose.”

Ms Cooper told the rally: “When the most powerful man in the world says it’s okay to sexually assault women because you are rich and powerful, we have to stand up and say no way.”

Hollywood actress Rebecca Hall said it was “important for me to march in solidarity” in London.

The half American, half British actress added: “Yesterday was a confusing day and a sad day – I was sad to see Obama leave.”

“Stand united, we will never be divided”, was the message chanted by the crowd as people marched through central London.

Cheers erupted every few minutes as the crowd held up placards to the beat of drum and bass music from a portable sound system.

Pink, heart-shaped balloons and messages to Donald Trump were carried by the crowd with people travelling from as far as Scotland to attend the march.

“It’s sending a message of solidarity,” said Valuska Andrews, 49, who had come from Edinburgh.

“We want progressive politics and the truth. It’s about people supporting each other.”

Her sister Ludi, from south London, added: “Women’s rights is a huge issue. We have had choice and we want our daughters to have that.”

A protest against Mr Trump also took place at London’s US embassy on Friday night.

Protests also happened in Edinburgh, Glasgow and Manchester as Mr Trump was being sworn in as the 45th US president.

Events are also being held in cities across the US – from New York to Seattle – while hundreds of so-called sister marches are held around the globe.