Africa’s first Nobel Prize winner for Literature, Wole Soyinka, has spoken for the first time since he said in October that he would cut up his green card if Donald Trump was elected president of the United States.

While the writer and poet would not elaborate on whether or not he had torn up his green card, or even if he had disposed of it, he told CNN: “I did exactly what I said I was going to do, which is how I always operate. It was a personal thing and I did everything I had to do personally.”
The Guardian reported in November that Soyinka told students at Oxford University of his intention to “cut my green card myself and start packing up,” if Trump won the election.
The former Scholar-in- Residence at New York University told CNN he realised “quite early on” Trump could win.
“That’s when I began to scream and to prepare, and say if this man gets in and it’s looking as though he might, me, I’m out.” 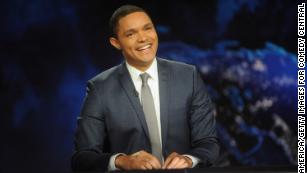 Africans react on Twitter after Trump win
“The American society is a very peculiar one. There are so many nationalities, so many interests, so it’s quite possible for a demagogue to twang the negative chords in various constituencies of interest.”
“Even though they’re coming from different directions you can utilize that common negativity to pool them to back you. This is the story of many dictators, demagogues, populists, even progressive populists.” 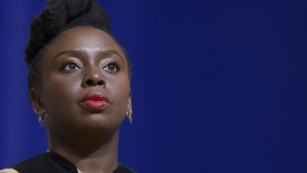 Chimamanda Adichie: most influential woman in Africa?
Soyinka held a press conference in Lagos on Monday to discuss the intense debate surrounding his green card. He spoke of not understanding the “fuss” around a “personal response” and spoke of “feeling sorry” for outgoing President Barack Obama.
“Obama was deriving no pleasure from handing over,” he said. “I watched the meeting, the body language, the tone, everything. This must be one of the most difficult duties he ever carried out as a president, I do not exaggerate. So I said I felt sorry for him.”
He also urged people to focus on important matters, such as the danger of Trump’s anti-immigrant rhetoric.
“The important thing, what really matters, is the rhetoric that got him there,” he said. “There was a rhetoric against the black peoples and in particular, specifically named, Nigerians, and I responded to it, and that’s my business.” 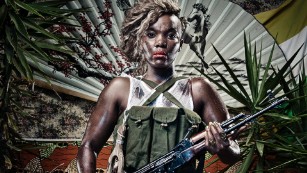 ART X Lagos: Breathing new life into contemporary art
Despite his stance he did not rule out returning to the US in the future.
“If I find something is absolutely essential, yes, of course I’ll visit there,” he said. “But I will not go there on my own behalf and I’ll be going as ordinary stranger, [an] ordinary citizen.”
“It’s more arduous, the queues are longer, you’re just carrying a regular visa, but I am willing to go through that if it becomes necessary.”