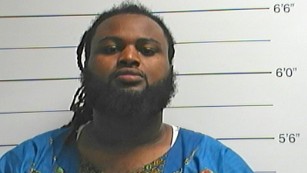 This is Cardell Hayes ,the man who shot and killed a former Football player Will Smith on Sunday morning.

WHEN WILL GUN VIOLENCE STOP IN AMERICA?

Will Smith and his wife, Racquel, were “having a blast” at a city festival mere hours before they were both shot, leaving the former New Orleans Saints defensive end dead and his wife hospitalized.

A New Orleans Police Department spokesman Tyler Gamble was reluctant to use the term “road rage,” but a police statement says Smith and the driver of a Hummer SUV “exchanged words” before the Hummer’s driver shot Smith multiple times and shot Smith’s wife in the right leg.
Former New Orleans police officer Billy Ceravolo, who was at dinner with Will and Racquel Smith before the shooting, told the media over the phone that Racquel Smith was on the mend, but he declined to answer further questions.
“She is out of surgery and doing well, and that’s the highlight of today,” he said.
The Orleans Parish Sheriff’s Office booked Cardell Hayes, 28, on second-degree murder charges early Sunday, Gamble said. Bond has not yet been set in the case, and “the investigation is ongoing,” he said.
“I don’t have any information indicating they knew each other at this time,” Gamble told the media in an email, but New Orleans Police Superintendent Michael Harrison said during a Sunday afternoon news conference that police are still investigating whether Hayes and Smith knew each other.
One matter that has become part of the probe, Harrison said, is whether a decade-old lawsuit that Hayes filed against the city after police fatally shot his father has anything to do with Saturday’s shooting. Ceravolo is named in the lawsuit.

A dinner, then a deadly shooting

Details are still emerging about the moments leading up to the deadly shooting.
Earlier Saturday, Smith posted a selfie of him and his wife. The caption said the pair were having fun Saturday night at the French Quarter Fest, an annual event in the famed New Orleans district.