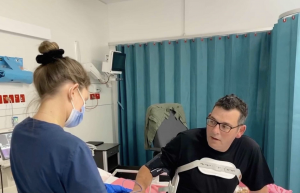 Victorian premier Daniel Andrews has shared a photo from his Melbourne hospital bed where he continues to recover from a broken vertebrae.

Clean-shaven and wearing a black t-shirt, the 48-year-old Labor leader is shown in the photo wearing what looks like a support brace which crosses his chest and goes beneath his arms.

Mr Andrews has been moved out of the Intensive Care Unit to the general ward at the Alfred Hospital and will not be required to undergo back surgery for now.

The Premier released a short statement from The Alfred Hospital earlier on Saturday saying that he had been moved and remained in a stable condition.

“The good news is no surgery for now – but the doctors tell me recovery and rehab is still going to be a very long journey,” Mr Andrews said.

Mr Andrews was taken to hospital early on Tuesday after slipping on wet stairs at a Mornington Peninsula holiday rental while getting ready for work.

It was later revealed that he had broken several ribs and fractured his spine.

He was initially treated at Peninsula Private Hospital but transferred to Alfred Trauma Centre in Melbourne on Tuesday evening after specialists assessed an MRI scan.

Doctors were considering whether he would need back surgery earlier in the week.

“Mr Andrews is comfortable and doing well. There is no plan for surgery at this stage,” Professor McLoughlin said.