Trump agrees to honour ‘One China’ policy despite threats 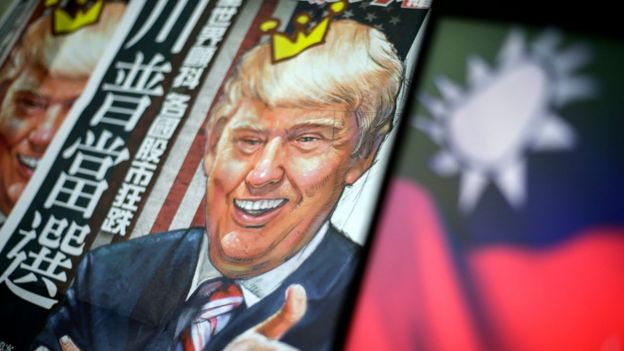 US President Donald Trump has climbed down on past threats and agreed to honour the so-called “One China” policy.

He backed the long-standing agreement during a call with Chinese President Xi Jinping, the White House said.

The One China policy states that there is only one Chinese government.

Mr Trump broke with diplomatic norms in December, by accepting a call from the president of Taiwan, considered a breakaway province by China.

As president-elect, Mr Trump also said he saw no reason why the agreement should continue without key concessions from Beijing

The telephone conversation on Thursday night was the first between the two since Mr Trump took office on 20 January, though the new US president has called several other national leaders.

On Friday, Mr Trump said the conversation was “very warm”.

He added: “We had a very, very good talk last night, and discussed a lot of subjects. It was a long talk.”

He made the comments during a press conference at the White House with Japanese Prime Minister Shinzo Abe.

The White House said a wide range of issues were discussed during the US-China call, which it characterised as “extremely cordial”. The two leaders had invited each other to visit, it said.

A statement from Beijing said China appreciated Mr Trump’s acknowledgement of the One China policy, calling the two nations “co-operative partners” who could “push bilateral relations to a historic new high”.

Taiwan, meanwhile, said it would continue “close contact” with the US, pointing out that maintaining good ties with Washington and Beijing was key to regional stability.

What was at stake?

Mr Trump has caused concern in Beijing with his stance on trade and the South China Sea, but it was his decision to accept a call from Taiwanese President Tsai Ing-wen that triggered most alarm.

Though the US is Taiwan’s main military ally, no US president or president-elect had spoken directly to a Taiwanese leader for decades.

Under the One China policy, the US recognises and has formal ties with China rather than Taiwan.

Mr Trump had indicated that policy could change, suggesting the US should not abide by One China unless it secured concessions from Beijing on trade.

Comments by Secretary of State Rex Tillerson on China’s military build-up in the South China Sea further chilled ties. He suggested that the US should block access to artificial islands China is building in disputed waters.

Chinese officials have reacted relatively calmly to remarks from the new administration, though they lodged an official protest over the Taiwan phone call.

But the Taiwan issue is very sensitive, something state media made clear when it accused Mr Trump of “playing with fire”.

How did the call happen?

The telephone call followed a letter sent by Mr Trump to Mr Xi on Thursday – the president’s first direct approach to the Chinese leader. In it, Mr Trump said he looked forward to “constructive relations”.

The New York Times reports that it was hand-delivered to China’s ambassador by National Security Adviser Michael Flynn, who had also spoken to China’s top foreign policy official last week.

There were other signs that the White House was seeking to stabilise ties, such as Ivanka Trump attending a Lunar New Year celebration at the Chinese Embassy in Washington.

At a press briefing, Chinese Foreign Ministry spokesman Lu Kang declined to answer whether Mr Trump’s acknowledgement of the One China policy had been a condition of the call.

A win for Beijing? by Carrie Gracie, BBC China editor

The content of the phone call between Mr Trump and Mr Xi will be celebrated in Beijing as signalling a return to the traditional framework of the US-China relationship.

Three weeks into the new American administration, after a score of phone calls between Mr Trump and other world leaders, China’s absence from the list was becoming ever more conspicuous.

Many Chinese citizens see Taiwan as the last piece in China’s territorial jigsaw. Any further move towards independence and international recognition for the island would have represented a dangerous humiliation for Mr Xi.

With the presidential phone call, Beijing can draw a line under such fears. Three weeks in, it has won a clear and unequivocal commitment from the Trump administration to honour the One China policy.

However, it is not clear what, if anything, the Trump administration has won in return.