The face of the Olympics will never look the same

Simone: That’s a name many Olympic viewers will never forget.

As recreational swimming became increasingly popular across the United States in the 1920s, public pools and beaches were racially segregated. For the next few decades, swimming role models were white, such as swimmer and actress Esther Williams, who was often featured in synchronized swimming scenes in elaborate Hollywood films.
By 1964, “wade-ins” to protest segregation at public beaches and pools became a part of the civil rights movement. That year, young black and white protesters in St. Augustine, Florida, wereassaulted with acid thrown into the pool water before being locked in jail in their bathing suits for daring to challenge segregation. 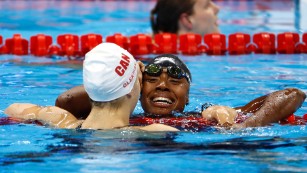 Simone Manuel: 5 things to know about gold medal winner
Now, 52 years later, the world just watched Simone Manuel, a 20-year-old black woman, hop in a pool and win gold in the women’s 100-meter freestyle at the Summer Olympic Games in Rio de Janeiro. She became the first African-American woman to win gold for the United States in an individual Olympic swimming event.
In 1928, women’s gymnastics was added to the Olympic competition, however, the history of black Olympians in that sport has been “relatively short and recent,” according to Team USA.
When Simone Biles, a black woman, won the all-around title at the World Championships in Antwerp, Belgium, in 2013, Italian competitor Carlotta Ferlito told an Italian journalist, “next time, we should also paint our skin black, so then we could win, too.”
The journalist and Ferlito both laughed over the racist remark. Biles’ parents said that the comments bothered her.
“I found it very insulting. … The racial comment was really out of line,” Biles’ father, Ron, told USA Today at the time, adding the irony of how “normally it’s not in her favor being black, at least not in the world that I live in.”
Now, two years later, 19-year-old Biles has won all-around gold at the Olympic Games — and the jeers coming from her critics has been replaced with cheers.
“I would like to be remembered as someone who never gave up,” Biles told CNN. “It’s like everything that has led me up to this moment has paid off, and it’s all been worth it. I have no regrets, and I’m just very excited, but then again, I do have two gold medals now, but it doesn’t change who I am. I’m still the same person.”

Both Manuel and Biles have received much attention for their accomplishments in their respective sports — sports in which black athletes were shunned or had limited access to take part. 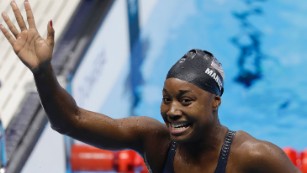 Simone Manuel breaks ultimate color barrier (Opinion)
This lack of diversity can be attributed to a combination of factors, including access to gyms and pools in predominantly black neighborhoods, the expense of participating in the sports, having no role models for young black athletes to look up to, and misconceptions that “blacks just don’t swim” or don’t get their hair wet or don’t have the right “body type” for gymnastics.
USA Gymnastics and USA Swimming have made some efforts to study and increase diversity. A diversity study published in 2008 of 300 gymnastics gyms (PDF) in the United States found that only about 6% of athletes were African-American. Nationwide, blacks make up about 13% of the United States population.
Among the survey comments from USA Gymnastics professional members, a respondent wrote, “In good conscience, I cannot fill out such a form. From a personal political point of view, I believe this ‘strategy to help raise participation in under-represented racial groups’ is UTTER NON-SENSE.”
This year, the Organizing Committee of the Olympic and Paralympic Games in Rio noted that Biles, Olympic medalist Gabby Douglas and Olympic first-timer Laurie Hernandez make up themost diverse gymnastics team in United States history.
Join the conversation

Meanwhile, USA Swimming hosts diversity camps, has developed community partnerships with city departments in diverse areas and has a diversity coach mentorship program.
Manuel and Biles are role models for young athletes while expanding the image of the black female athlete. The two women share much more than a name: They represent a historic moment in Olympics history, a fact that didn’t go unnoticed by other black Olympians, who cheered them on social media.
Claressa Shields, the first American woman to win gold in boxing, tweeted, “Way to go Simone Manuel! Represent! There will never be another first! Join the list of first! Proud!”