Tens of thousands of Erdoğan supporters rally in Germany

Tens of thousands of supporters of the Turkish president, Recep Tayyip Erdoğan, have rallied in Cologne in Germany. Police put the turnout at about 40,000 as demonstrators chanting “Turkey” and waving national flags turned the rally site next to the Rhine into a sea of red on Sunday.

“We are here because our compatriots in Germany are standing up for democracy and against the attempted military coup in Turkey,” said Turkey’s sports minister, Akif Çağatay Kılıç, who was at the rally.

Since the attempted military power grab on 15 July, Erdoğan’s government has launched a crackdown on those allegedly linked to the putsch that has seen the detention of almost 19,000 people, provoking international concern.

State media reported on Sunday that 1,400 military personnel had been dismissed over suspected links to the exiled cleric Fethullah Gülen – blamed by the Turkish government for the attempted coup – a day after Erdoğan moved to bring the military firmly under his control by announcing that the chief of staff would report to him. Gülen denies having orchestrated the putsch.

Earlier this week, more than 1,700 military personnel were dishonourably discharged for their role in the coup attempt, which saw a faction of the armed forces commandeer tanks, helicopters and planes in an attempt to topple the government. Erdoğan has said 237 people were killed and more than 2,100 wounded.

The number of public sector workers removed from their posts since the coup attempt is now at more than 66,000, including about 43,000 people in education, the Anadolu state-run news agency reported on Friday. The interior minister, Efkan Âlâ, said more than 18,000 people had been detained over the failed coup and that 50,000 passports had been cancelled.

With mass purges of suspected Gülen supporters well under way in all state institutions, the media and some private companies, the Turkish football federation said on Sunday all its affiliated boards had resigned for the sake of “security checks”. It said it was cooperating fully with the authorities.

The political strife in Turkey has found expression in Germany, which is home to the world’s biggest Turkish diaspora. The North Rhine-Westphalia state, where Cologne is located, is home to about one-third of Germany’s 3 million-strong Turkish community.

The Cologne rally was staged by groups including the pro-Erdoğan Union of European-Turkish Democrats. 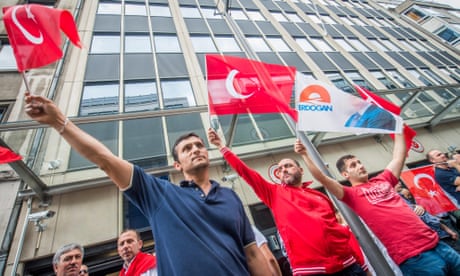 Hours before the event, Germany’s constitutional court denied an application to show live speeches from Turkey by politicians including Erdoğan. The decision caused anger in Turkey, with a presidential spokesman, Ibrahim Kalin, calling the decision unacceptable and a “violation of the freedom of expression and the right to free assembly”.

Meanwhile, skirmishes broke out at several smaller counter-demonstrations, with police moving in to separate about 80 rightwing nationalist Turks and 100 Kurds. About 250 far-right extremists, including some known hooligans, had also come together before being dispersed by police.

In an attempt to prevent violence between the camps, 2,700 officers – including several Turkish speakers – were deployed to keep the peace, while eight water cannon were standing by.

Cologne’s police chief, Jürgen Mathies, s: “One thing I want to make clear is that we will intervene against any kind of violence quickly, decisively and forcefully.”

Erdoğan enjoys a lot of support among the diaspora in Germany and about 1.5 million Turkish nationals living there can vote in Turkish elections. Erdoğan’s Justice and Development party (AKP) received 60% of the vote from Germany inlast November’s election, a bigger share than in Turkey.