Taiwan appears to have its first female president in a landmark election that could unsettle relations with Beijing. 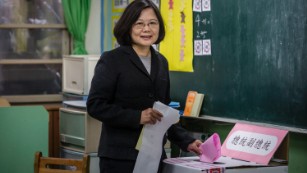 Her supporters filled streets, waving party banners and cheering to victory announcements made from a stage. Official election results have not yet been announced.

Voters lined up at polling stations, and when they closed, surveys suggested that Tsai Ing-wen, leader of the opposition Democratic Progressive Party (DPP), would win the presidential vote by a significant margin after eight years under the government of the pro-China Kuomintang (KMT) or Nationalist Party.

The ruling party was also in danger of losing control of the legislature for the first time in parliamentary elections, with a record 556 candidates in the race for 113 seats.

At a post-election news conference, Tsai said both Taiwan and Beijing “have a responsibility to do their utmost to find mutually acceptable ways to interact … and ensure no provocation and no surprises.”