A Syrian refugee detained by police in Germany had links to the ISIS militant group and was planning a bomb attack “with Islamist motives,” German officials said Monday.

German police discovered 1.5 kg of extremely dangerous explosives in a flat in Chemnitz before detaining 22-year-old Jaber al-Bakr in Leipzig on Sunday, ending a manhunt that lasted almost two days, the German general prosecutor said. A specific target was as yet unknown, he said.
The arrest of a 22-year-ol Syrian ended a manhunt that lasted almost two days.
“His approach and behavior suggest an IS context,” said Joerg Michaelis, the president of the Saxony crime office, referring to the Islamic State, or ISIS.

Tied to the sofa

Al-Bakr was captured after two other Syrian men tied him up in their apartment in Leipzig and alerted police. Leipzig is about 100 kilometers (60 miles) from Chemnitz.
Al-Bakr had met the men at Leipzig’s train station on Saturday, Michaelis said, and asked if he could stay with them. The men took in the stranger but realized on Saturday night through social media that he was wanted by police. They tied al-Bakr to their sofa and alerted the police via social media, asking them to come detain him. 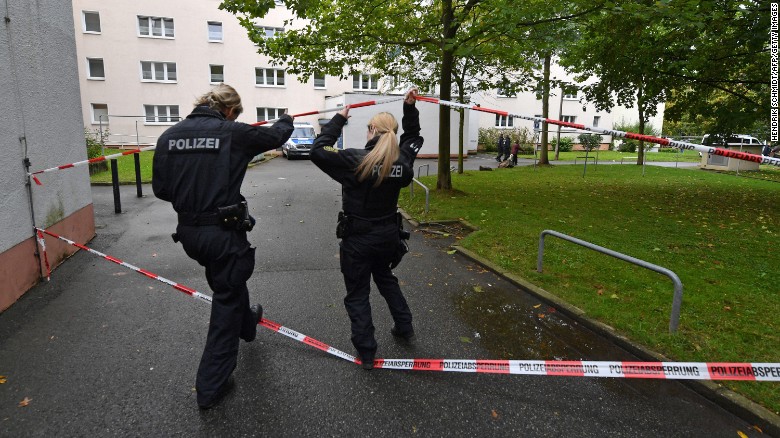 Police secure a residential area in Chemnitz, Germany, after explosives were found in an apartment.
For security reasons, police would not identity the two men who turned in al-Bakr.
“Our thanks and our recognition go out to the (men) from Syria who informed the police about the suspect’s whereabouts,” said Ulrike Demmer, a spokesman for German Chancellor Angela Merkel.
Angela Merkel, Germany’s chancellor praised the initiative of the two Syrians for informing the police of al-Bakr’s whereabouts.

Al-Bakr had taken concrete steps earlier this month to plan the attack and was possibly planning to use an explosive vest. authorities said.
Police on Saturday said they had found a highly explosive mix of substances more dangerous than TNT in a raid on what appears to be al-Bakr’s apartment in Chemnitz. They said the mix could cause significant damage in small amounts.
The material found was likely TATP, or acetone peroxide, which was used in recent terror attacks in Brussels and Paris, Michaelis said.
Interior Minister Tomas De Maziere released a statement Monday saying: “The preparations in Chemnitz are similar from everything that we now know to the preparations for the attacks in Paris and Brussels.”