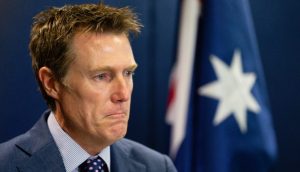 A former boyfriend of the woman who alleged she was raped by Christian Porter told New South Wales police that Porter had boasted to him in the early 1990s that he had had sex with her, Guardian Australia can reveal.

It is understood that the Macquarie Bank managing director, James Hooke, a friend of both Porter and his accuser for 30 years, gave the evidence in a signed statement to NSW police in March this year.

Hooke’s statement calls into question the former attorney general’s claim at a press conference on 3 March that he had not had sex with his accuser. There is no suggestion that Porter deliberately misled the public with this claim, nor that the statement has any bearing on the central rape allegation which Porter strenuously denies.

Friends of Porter’s accuser continue to lobby for an independent inquiry into the alleged sexual assault which is alleged to have happened in 1988, while others have suggested that a private prosecution could now be pursued.

On 3 March Porter identified himself as being the subject of an ABC article that revealed the existence of a dossier accusing an unnamed cabinet minister of rape, which had been sent to the prime minister.

At an emotional press conference in Perth, Porter said he had known the woman only for “the briefest periods, at debating competitions when we were teenagers”.

Porter denied being in a relationship with her and said he “hadn’t had any contact from that person, at all, to the best of my recollection in the 33 years since that time in January 1988”. Porter has also said he only became aware of “rumours” in the “vaguest terms” in November that he “had in some way offended against the person 33 years ago”.

Nine days after the press conference Hooke came forward revealing he had “clear recollections of relevant discussions” with the woman, whom he described as a “very dear friend”, from “mid-1988 until her death”, and with Porter from April 1992 onwards.

Guardian Australia understands that Hooke gave a formal statement to NSW police on 17 and 22 March in which he said Porter had boasted to him about having sex with his friend. Hooke did not provide a comment when approached by Guardian Australia.

NSW police confirmed in April that they had taken a statement from Hooke but said this did not change their position that there was not sufficient admissible evidence in the case and that the investigation remained closed. Police closed the case when the woman withdrew from the investigation shortly before taking her life on 24 June 2020.

Last Thursday the federal court released the dossier which contains a summary of statements, and original statements, from the woman detailing the allegation that Porter raped her three times in the early hours of 10 January 1988 after they had been out dancing at a hotel in Sydney’s Kings Cross.

Guardian Australia reported in March that Porter’s accuser also recalled that she had had dinner with Porter in Perth in 1994. A close friend of the now-deceased woman, who accompanied her to make a statement to NSW police in 2020, told Guardian Australia that Porter had dined with her friend after 1988.

A spokesman for Porter later clarified that this contact was “not impossible” but Porter did not remember any “specific contact” after 1988.

In March Hooke said in a written statement to media: “I continue to be devastated by the untimely death of my very dear friend and I am enormously concerned for the privacy and dignity of [her] family. I am also concerned for the well-being of Christian Porter. I have known all of them for approximately 30 years. We all find ourselves at a very upsetting time.

“Mine is just one set of recollections and I am aware of the fallibility of human memory, however unintentional. That said, I have what I consider to be clear recollections of relevant discussions I had with [the woman] over the years from mid-1988 until her death.

“I also have what I consider to be clear recollections of relevant discussions I had with Christian Porter from April 1992 and through the mid-1990s.”

Hooke said Porter was “entitled to the presumption of innocence” with respect to the allegations but supported an independent inquiry into “the important non-criminal aspects of this matter”.

Friends of the woman have been consistently lobbying for an independent inquiry into the accusation, a cause championed by the Greens senator Larissa Waters and the independent Jacqui Lambie. Their attempts were both blocked by the Coalition and One Nation in the Senate last week.

The South Australian coroner is also yet to make a decision about whether to launch an inquest into the woman’s death.

After the release of the dossier on Thursday, Vic Kline, a barrister and leader of the New Liberals, announced that he and fellow former prosecutor and New Liberals candidate, Vania Holt, intend to launch a private prosecution against Porter.

Jo Dyer, a friend of the woman who sued to remove Christian Porter’s barrister Sue Chrysanthou from his defamation case and has become the public face of the campaign for an inquiry, welcomed the move.

Dyer told Guardian Australia she was “encouraged by their interest and support” and would meet with Kline and Holt to discuss it.

“There are other legal processes that will have an impact on the information in the public domain and it is appropriate to see that they run their course first,” she said.

“But any credible forum to test the evidence is worth looking at.”

According to reports, Porter’s lawyer, Rebekah Giles, has dismissed the possible private prosecution as a stunt.

“There is now broad acceptance, even from the ABC, that the credibility of the allegations is such that they are incapable of proof to any applicable legal standard, criminal or civil, so this is a stunt which does not warrant further comment,” Giles told Sydney’s Daily Telegraph.

After Porter relinquished the attorney general’s portfolio, he was appointed minister for industry and science. Scott Morrison has declared Porter is an “innocent man under our law”.