Mangar Makur Chuot – the South Sudanese refugee who rose from a refugee camp to qualify for the Olympic Games – has been controversially de-selected by the South Sudan team, without explanation a week before the Games begin.

Chuot has declined to comment, but his coach Lindsay Bunn said South Sudan’s selection process for the Games had been tainted, and that ineligible athletes with inferior records had been preferred.

“Mangar is devastated that his selection by the Southern Sudan Athletics Federation has been usurped at the very last minute,” he told the Guardian. “Right up until today he has been waiting with his bags packed for his flight details. He learnt of his removal from the selected team by a third party email.”

Chuot, now a dual Australian-South Sudanese citizen and based in Perth, Australia, is the reigning South Sudanese national champion over the 200-metre sprint and he holds the national record in the event.

He was the Australian national champion over 200m in 2014, but in 2016 had chosen to run for his homeland at the Rio Games, in honour of his father, Makur Chuot, who was killed during Sudan’s bloody civil war.

His personal best time – 20.76 seconds – is just 0.26 outside the automatic Games qualifying time.

In December last year, Chuot was officially informed by the South Sudanese Athletics Federation that he would be competing for South Sudan in the country’s first Olympics.

He has been issued athlete’s accreditation to the Rio Games.

But on Thursday, eight days before the Games opening ceremony, and 14 days before his heat, Chuot received an email informing him that South Sudan’s National Olympic Committee had nominated only three athletes for the Games, not including him.

The email said it might be possible for Mangar to attend the Games as a coach or official, but that he would not be competing.

The secretary of the South Sudanese Athletics Federation, Jimmy Long, confirmed to the Guardian that Chuot had been selected by the athletics federation, but then rejected by the country’s Olympic committee.

“It’s not good, because he’s our No 1. He’s our best athlete. We submitted for him to go to the Rio Olympics, but the national Olympic committee has decided that he is not going. The NOC has the power to choose which athletes to send.

“Our country needs its best athletes competing, but he is not selected.”

South Sudan will send three athletes to the Rio Games: 16-year-old Santino Kenyi in the men’s 1500m; Guor Marial, a 33-year-old based in the US who will run his second Olympic marathon after competing at the London Games under the Olympic flag; and Margret Rumat Rumar Hassan, a 19-year-old sprinter who will run in the women’s 200m.

Two of those athletes selected for the Games were not put forward to compete by the South Sudanese Athletics Federation. The Guardian has been told only athletes nominated by the athletics authority should be considered for Olympic selection.

Secretary general of the South Sudan National Olympic Committee, Tong Chor Malek Deran, told The Guardian that because no South Sudanese athletes had run automatic qualifying times, the country had been restricted in selecting one male and one female athlete. Marial was able to be added to the team because of his previous Olympic experience.

“We wanted to take more athletes but the rules state that this is not allowed. We did not have that privilege,” Tong said from Juba, the South Sudanese capital.

“I am very, very sorry that he cannot go, I regret this, but this is the situation for South Sudan.”

Tong said that Chuot was a talented runner, but that the mens’ 200m field was crowded and competitive. Seventy runners have qualified for the men’s 200m in Rio, the second-most of any event on the track, behind only the 100m.

“He competes in the 200m, and so many have qualified in the same event,” Tong said.

“Mangar is very close, less than a second from qualifying time. There are other championships that he can compete in, and run a time to qualify [for the next Olympics].”

The Guardian has confirmed that Chuot’s coach Bunn has lodged a formal complaint to the International Olympic Committee alleging possible corruption in the selection process.

South Sudan’s has been a tortuous route to the Olympic Games. The country emerged from more than four decades of Sudanese civil war – at the cost of hundreds of thousands of lives – to be declared the world’s newest nation on 9 July 2011.

But it has been a troubled independence, of neither peace nor prosperity. The country remains benighted by famine and drought, and this month, internecine violence has resumed.

South Sudan has almost no sporting facilities and few people who might use them. Generations of children were forcibly conscripted into armies instead of being taught to play games. “We are going to arm them with sports instead of with guns,” Wilson Deng Kuoirot, South Sudan’s Olympic committee president, promised of the country’s youth when his country was admitted to Games ranks in 2015.

In parallel with his new nation, Mangar Makur Chuot had experienced one of the most unlikely rises to an Olympic Games of any athlete.

After being forced to leave the country during the civil war, which claimed his father’s life, and spending eight years in a refugee camp in Kenya, Chuot and his family were selected for resettlement as refugees in Australia. 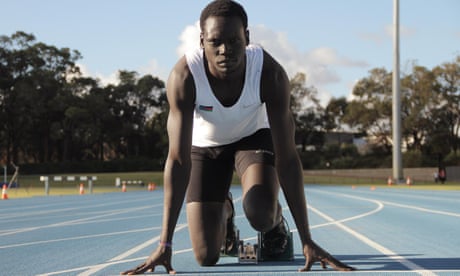 From a refugee camp to Rio

He was discovered running in a Perth park by Bunn, who encouraged him into his squad, and taught him to run.

Since 2012, Chuot has won the 2014 Australian 200m title, and returned to South Sudan in 2015, dominating the country’s national championships at the Buluk Athletics track.

He competed at the African Championships in Durban in June this year, establishing a new South Sudanese record for the 200m.