For three years South Sudan has tumbled deeper into self-inflicted chaos, and it now finds itself on the brink of something even more terrifying.

United Nations officials rarely use the words “genocide” and “ethnic cleansing,” but they now say potentially both could envelop the world’s youngest country.

Since violence flared in Juba in July and spread to the previously peaceful southern Equatoria states of South Sudan, 340,000 people have fled the violence into neighbouring Uganda.

Every day, on average, another 2,500 South Sudanese become refugees, and the stories of what they escaped and what they saw on the way, add to the evidence of killing, rape and the targeting of civilians along ethnic lines.

A trickle of a stream divides these two countries and there are small bridges or fallen trees every couple of kilometres.

The first time he crossed was with his immediate family; the second – a day later – was with his brother’s wife and her five children who he had gone back to help.

‘They don’t want us’

Six-year-old Moriswani was limping up the hill to the Ugandan police post where their possessions were inspected before being allowed on to a reception centre a little further up the road.

I asked him what they had left behind.

“They are killing people, sleeping with wives, stealing. They are not shooting you, they are cutting you with a knife. Even small children can be beaten down,” Mr Thomas told me.

The children gulped water and sat exhausted in the shade of a harsh sun.

“They don’t want us,” he said, and gave his explanation of why his town of Yei, just 80km (50 miles) from the border, had become a place he had to leave. 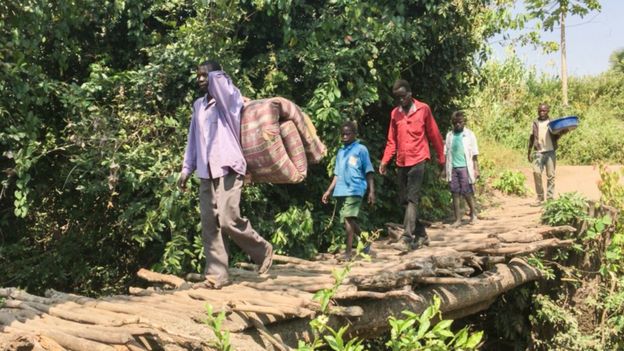