Russian jets keep buzzing U.S. ships and planes. What can the U.S. do?

Two separate close encounters between the Russian and U.S. militaries in recent days have left many wondering if future incidents could result in an armed clash.

Pentagon spokesman Capt. Jeff Davis told reporters Monday, “There have been repeated incidents over the past year where Russian aircraft have come close enough to other air and sea traffic to raise serious safety concerns.”
“Unsafe and unprofessional actions by a single pilot have the potential to unnecessarily escalate tensions between the two countries,” he added.
After two Russian fighter jets flew within 30 feet of the USS Donald Cook last Tuesday, Secretary of State John Kerry warned that the Russian action could have resulted in the jets being shot down.
Kerry told CNN en Español that “under the rules of engagement, that could have been a shoot-down, so people need to understand that this is serious business.”
When asked why the Russian plane was not shot down, a senior military official told CNN that “the Russians were dangerous but did not demonstrate hostile intent and were unarmed.”
On Saturday, U.S. European Command, which oversees U.S. military operations in Europe, said that a Russian interceptor flew within 50 feet of an American reconnaissance aircraft, a maneuver the U.S. military described as “unsafe and unprofessional.”
Russia’s Defense Ministry said that reports on Thursday’s incident were “not consistent with reality” and that the Russian aircraft’s maneuvers had been “performed strictly in accordance with the international regulations on the use of airspace.”
Both incidents took place in the Baltic Sea.
The U.S. Navy does not publicly discuss its rules of engagement in order to prevent adversaries from using them to their advantage.
But a Navy official told CNN that “every commanding officer of a U.S. Navy ship is empowered to make the decision regarding the self-defense of the ship and its crew.”
The official added that in the case of the Cook, “The commanding officer recognized that the flight patterns were unsafe and unprofessional but did not feel threatened and therefore did not engage with tactical weapons.”
Retired Navy Capt. Rick Hoffman lauded the performance of the ship’s commanding officer, telling CNN that the “destroyer captain exercised extreme professionalism and extreme restraint.”
Hoffman, who commanded a frigate and a cruiser during his time in the Navy, said that the Russian action was probably “sufficient” to justify a shoot-down. But he added, “in this particular case, from my perspective, I think he took all the right action and demonstrated calm professionalism.”
As to why Russia has engaged in these type of aerial maneuvers, Hoffman said that “President (Vladimir) Putin is clearly playing domestic politics.”
Heather Conley of the Center for Strategic and International Studies agreed, telling CNN, “This highly risky behavior seems to be an attempt to cause or create an accident or incident. Perhaps Mr. Putin believes he needs to divert the Russian people’s attention away their economic troubles.”
She added, “To America’s European allies, the Kremlin is messaging that the U.S. cannot protect them from Russia if Russia wants to do something to them militarily.” 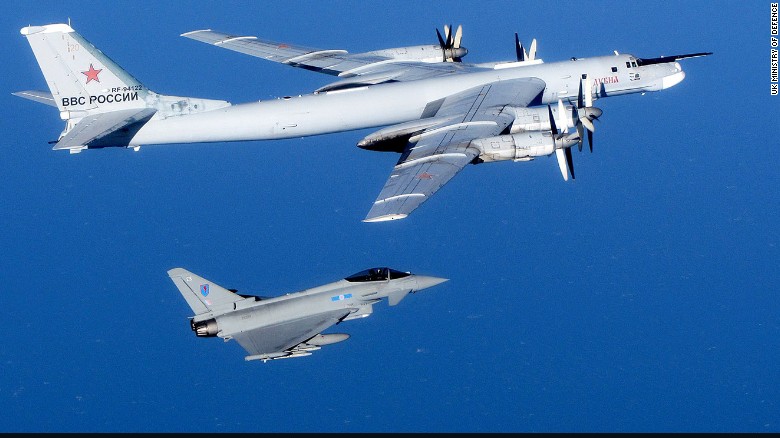 Photos: Russian warplane intercepts
A Russian Tu-95 Bear bomber is escorted by a British Royal Air Force Typhoon fighter during an intercept in September 2014. Click through the gallery to see other intercepts in late 2014.