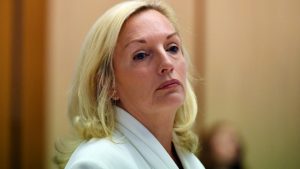 A parliamentary inquiry into Christine Holgate’s departure from Australia Post has recommended the resignation of the organisation’s chair and an apology from the Prime Minister.

The Senate committee chaired by Greens Senator Sarah Hanson-Young made 25 recommendations, many of which were not supported by Coalition members of the inquiry.

It called for Australia Post chair Lucio Di Bartolomeo to resign for several reasons, including “in acceptance of his responsibility for the organisation’s failings with respect to the Holgate matter”, and “the veracity of his evidence provided to the committee”.

The report also recommended that Australia Post’s board, Prime Minister Scott Morrison and the shareholder ministers apologise to Ms Holgate for “denying her the legal principles of procedural fairness and natural justice”.

“Within hours of Ms Holgate’s fateful estimates appearance, a high-performing and well respected CEO of one of Australia’s most significant and valued government institutions was placed in an untenable position by the Prime Minister’s declaration during Question Time that if Ms Holgate did not wish to stand aside, ‘she should go’,” the Senate committee said.

“The evidence before this Committee indicates the ultimatum … was not a spur of the moment reaction, but rather a calculated response aimed at achieving a predetermined outcome.”

Ms Holgate stepped aside as CEO last year after it was revealed four staff members had been gifted luxury watches in 2018 as a reward for securing a lucrative deal.

She later told a Senate committee she was “humiliated” and pushed out of her position unwillingly by the company’s chair.

She also asked for an apology from Mr Morrison, who declined but said he did not intend to cause Ms Holgate distress.

“The intense public scrutiny and lack of support from Australia Post resulted in Ms Holgate starting 22 October 2020 as one of the most influential women in Australian business and a successful and popular CEO, and ending the day disgraced and humiliated, hiding from reporters and feeling suicidal,” the report said.

“It is undeniable that the Board and the government (including the shareholder ministers and the Prime Minister) abandoned Ms Holgate to suffer immeasurably and ultimately to tender her resignation only 10 days later.”

The inquiry also called for the actions of Communications Minister Paul Fletcher to be referred to the Auditor General and that the Australia Post board be re-structured.

Speaking after the report was tabled, Senator Hanson-Young said the events leading up to Ms Holgate’s departure were a “shemozzle”.

“[We] had a Prime Minister who got too hot under the collar, couldn’t control his own emotions in Question Time and went over the top,” she said.

“That then followed a flurry and chaos on the board of Australia Post. And it was Ms Holgate, her reputation, her job, that was sacrificed.”

A spokesperson for the Prime Minister said the government had “no intention of responding to a politicised report” from a committee controlled by Labor and the Greens.

Mr Fletcher said the government’s response has been reflected in the dissenting report.

“The government has consistently acknowledged that Ms Holgate was an effective chief executive of Australia Post and I congratulate her on her new role at Global Express,” he said in a statement.

Recommendations not supported by Coalition Senators

In a dissenting report, Liberal and National senators described the inquiry as a “highly politicised exercise” which had become a “significant distraction to the valuable work of Australia Post”.

They said the claim Ms Holgate was denied procedural fairness was contested and that the matters surrounding her departure are now subject to mediation with Australia Post.

The dissenting report also said evidence to the committee showed Mr Di Bartolomeo “sought to work in a constructive manner with Ms Holgate during what was a fast-moving sequence of events being played out in the spotlight of the media.”

Ms Holgate has since been announced as the new chief executive of rival parcel delivery firm, Global Express, which was part of Toll Holdings but is being sold to private equity firm Allegro Funds.