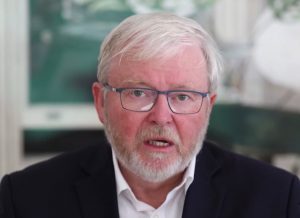 Australia’s largest-ever parliamentary e-petition, which calls for a royal commission into media diversity and has more than 500,000 signatures, has been submitted to the House of Representatives.

The petition was launched by former prime minister Kevin Rudd.

“The bottom line is the lifeblood of our democracies depends on a fair, balanced, independent, free media which separates out two things: the reporting of facts and the expression of opinion,” he told CNN on Monday.

The media sector has endured the challenge of reduced revenues and concentration of voices in recent years.

The petition expresses concern over mass sackings of journalists, newspaper takeovers, the undermining of regional and local news, the ABC’s independence and whistleblower protection.

“Only a royal commission would have the powers and independence to investigate threats to media diversity and recommend policies to ensure optimal diversity across all platforms to help guarantee our nation’s democratic future,” it notes.

While this is the largest electronic petition ever, two traditional paper petitions have garnered more signatures.

A 2014 petition calling for funding for community pharmacies was signed by 1.2 million people.

The media diversity petition has been referred to Paul Fletcher, Minister for Communications, and under the rules of Parliament he has been “requested” to respond within 90 days. There is no formal obligation for him to respond.

Labor MP Andrew Leigh tabled the media diversity petition in the House of Representatives on Monday, describing it as “the largest e-petition in Australia’s history”.

“In Australia, the media is shrinking and extremely concentrated,” he said, citing a fall in the number of journalists.

“There are now over 20 ‘news deserts’ in Australia, which weakens the community and raises the risk of corruption going unchecked.”

The Government has provided $60 million for the Regional and Small Publishers Jobs and Innovation Package to assist media diversity.