The defiant statement Thursday came as both South Korea and Japan announced further restrictions on the state, including on visits by foreign missile and nuclear experts.
The Security Council voted unanimously on November 30 to impose their “toughest” sanctions yet on North Korea, stopping about $800 million in exports including coal and copper. 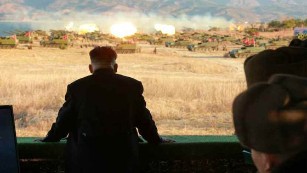 North Korean leader Kim Jong Un leads military drills focused on artillery battle training on Thursday, December 1.
The new restrictions came in response to North Korea’s nuclear warhead test in September, its fifth and potentially most powerful yet.
In the statement, North Korea said many countries that are members of the United Nations Security Council had already conducted their own nuclear tests and missile launches.
“Obama and his lackeys are sadly mistaken if they calculate that they can force the DPRK to abandon its line of nuclear weaponization and undermine its status as a nuclear power through base sanctions to pressurize it,” the statement read.

In addition to a new crackdown on exports, South Korea said it would block entry to North Korea for all foreign missile and nuclear experts if their work threatened the South.
Senior North Korean officials will also be blacklisted as part of the new embargo, the South Korean statement said.
“We have expanded the number of those subject to sanctions by adding to the list 35 entities and 36 individuals that are playing a critical role in developing weapons of mass destruction and contributing to the North Korean regime’s efforts to secure foreign currency,” Government Policy Coordination Minister Lee Suk-Joon said at a press conference.