Nigerian security forces have killed at least 150 people in a series of attacks against the largely peaceful pro-Biafra secessionist movement, according to a report by Amnesty International. 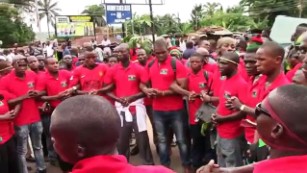 Pro-Biafran protestors gather in Onitsha, Nigeria on May 30 2016.
In what the human rights group calls “a chilling campaign,” security forces were apparently responsible for the extrajudicial killings, detentions, and torture of supporters of the Indigenous People of Biafra (IPOB), a group that is pushing for an independent Biafran state in Nigeria’s oil-rich southeast.
“This deadly repression of pro-Biafra activists is further stoking tensions in the southeast of Nigeria,” said Makmid Kamara, Interim Director of Amnesty International Nigeria.
“This reckless and trigger-happy approach to crowd control has caused at least 150 deaths and we fear the actual total might be far higher,” Kamara said.

The report was based on the analysis of 87 videos and 122 photographs, along with 146 witness interviews.
It states that many of the abuses occurred around the Biafra Remembrance Day celebrations on May 30, 2016, in Onitsha, Anambra State. Security forces raided homes the night before the event and then opened fire the next day with live ammunition on a crowd of approximately 1,000 people, the report says.
A 26-year-old man interviewed in the report said was at the rally when he was shot and then hid from security forces in a gutter. 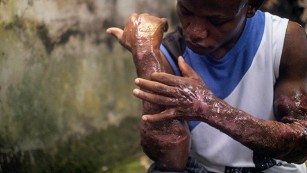 This 26-year-old man says he had acid sprayed on him on Biafra Remembrance Day in Onitsha.
He said that when soldiers found him they poured acid on him.
“I covered my face. I would have been blind by now,” he told Amnesty International. “He poured acid on my hands. My hands and body started burning. The flesh was burning… They dragged me out of the gutter. They said I’ll die slowly.”
The report acknowledges that some protesters threw stones, burned tires and in at least one incident, shot at police.
“These acts of violence and disorder did not justify the level of force used against the whole assembly,” the report reads.