When ISIS released its latest propaganda video last week, all eyes were on the militant group’s new poster boy. Clad in black, wielding a handgun and his face hidden by a ski mask, he issued threats in a distinctive London accent.

The parallels to “Jihadi John,” who was killed in a drone strike in November, were obvious and presumably intentional. Social media began to light up with people clamoring to find out the identity of the so-called “new Jihadi John.”

While authorities have said that they are still working to confirm the identity of the man, security agencies are said to be focused on a 32-year-old who converted to Islam from Hinduism and who calls himself Abu Rumaysah.

In response to questions in Parliament recently naming Abu Rumaysah, British Home Secretary Theresa May refused to comment about the name, citing an ongoing investigation.

The Londoner — who had been arrested on suspicion of belonging to a banned organization and other terrorism-related charges — skipped bail in September 2014, fleeing the UK with his wife and children and traveling to Syria to join ISIS. 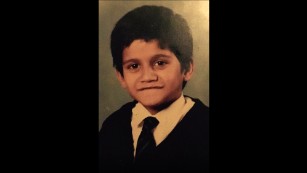 Did this London schoolboy grow up to become the new Jihadi John? Photo provided by the suspect’s sister, Konika Dhar.

But to 29-year-old law student Konika Dhar, he is not Abu Rumaysah but Siddhartha Dhar — or simply Sid — her older brother. Over tea and later an interview, she told me her story.

“He was a typical brother, I think,” Konika said. “He liked playing his basketball, which he was quite good at, video games and films. And he liked to collect comic books as well… just a typical, good older brother.”

Konika is a remarkably poised young woman, though the strain that her brother’s radicalization has placed on her family was obvious as we talked. 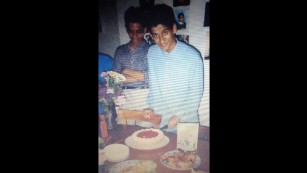 The man suspected of being the new Jihadi John celebrating his 14th birthday in London. Photo provided by the suspect’s sister, Konika Dhar.

She was visibly tense, and careful to avoid saying the wrong thing. She said she wants the world to see a different side of him, the side that she grew up with. She showed me photos of a beaming teenage boy cutting birthday cake.

“He was very friendly, very sort of laid-back, not too concerned with politics or anything…” Her voice drifted off.

After converting to Islam as a young man, Dhar began to change, Konika said. He refused to eat food prepared by his mother because it was not halal, or permissible to eat under Muslim law.

And he began to associate with Anjem Choudary, a lawyer-turned-radical Islamist preacher who is now facing charges of inviting support for ISIS online. Choudary has pleaded not guilty.

Not allowed to love non-Muslims

I interviewed Abu Rumaysah for CBS’ “60 Minutes” shortly before he fled the UK. During our conversations, he told me he was no longer able to love anyone in his family, even his mother. 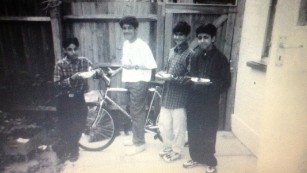 “She’s my mother and she has rights over me, so I have to take care of her. I have to look after her. I have to make sure that, you know, she’s protected and secure. So I fulfill my obligations like that,” he said, “But it’s not allowed for me to love non-Muslims. So that’s something that is a matter of faith.”

Konika said that she was shocked and saddened when she saw the interview.

“One thing that I’ve noticed is that he’s stripped his identity completely, and this is what’s sad … because he had the most colorful, creative personality, and I don’t know where it’s gone and where we’ve gone wrong, but it’s been lost. … There’s an element of guilt. I feel why could I not stop it? Are we that bad that you have to leave? That you have to go live another life?”

Konika said she desperately wants to believe that her brother is not the man in the ISIS video, that she cannot reconcile that killer with the boy she grew up with.

But she conceded that during the few conversations she has had with Dhar since he joined ISIS, he has shown no signs of remorse about the decisions he has made.

Konika said she believes, intuitively, that her brother is not happy. She said she believes he is a victim of brainwashing, which she fears will only get worse the longer he stays in Syria. She said she wants him to know that his family loves and misses him, and that he can still come home. But even as she said this, she twisted her mouth as if unsure whether she really believed her own words.

“I’m sort of conflicted with a sense of wanting to rescue him and save him, and at the same time grieving in my own time… I think it’s sort of a slow acceptance. I think now I’m coming to terms with the reality. And I don’t think the grieving process is coming to an end, and I don’t think it will ever.”