This list includes leaders who have said they will not vote for Donald J. Trump, have withdrawn endorsements of him or have called for him to step down as the nominee. People shaded in blue have said they will vote for Hillary Clinton.People who have been added to the list since a tape of Mr. Trump making vulgar remarks surfaced. 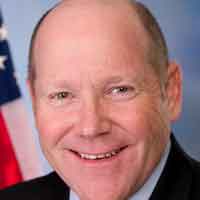 Mr. Ribble
“Trump … is employing the kind of hateful rhetoric and exploiting the insecurities of this nation, in much the same way that allowed Hitler and Mussolini to rise to power in the lead-up to World War II.”“When people call you brilliant, it’s always good, especially when the person heads up Russia.”“Donald Trump is a menace to American conservatism who would take the work of generations and trample it underfoot on behalf of a populism as heedless and crude as The Donald himself.”
“So if you see somebody getting ready to throw a tomato, knock the crap out of them, would you?”
“I would bring back waterboarding, and I’d bring back a hell of a lot worse than waterboarding.” don’t know anything about David Duke. O.K.? I don’t know anything about what you’re even talking about with white supremacy or white supremacists.”