The Louvre Abu Dhabi has indefinitely postponed the unveiling of Leonardo da Vinci’s Salvator Mundi, the world’s most expensive painting, which has been the subject of intense speculation over its acquisition and authenticity.

The United Arab Emirates capital’s department of culture and tourism, which was revealed as the owner of the work after an extraordinarily tense auction at Christie’s New York in November, announced on Monday in a tweet that the exhibition had been delayed.

Salvator Mundi (the saviour of the world), described by Christie’s as the biggest discovery of the 21st century, depicts Jesus Christ holding a crystal orb in his left hand while raising his right in a gesture of benediction. At $450.3m (£342.1m), it broke the world record for the most expensive painting sold at an auction, after a 20-minute sale involving unidentified bidders.

The painting was scheduled to be displayed on 18 September. No reasons were given for the postponement but the Abu Dhabi-based English-language newspaper The National reported that “speculation suggests the museum might be waiting for its one-year anniversary, on November 11”.

The painting, dated to approximately 1500, is one of fewer than 20 known paintings by Leonardo. According to Christie’s, it was possibly commissioned by the French king Louis XII and his wife, but its whereabouts were unknown during the 18th and 19th centuries after it went missing from the royal family’s collection.

The painting re-emerged in 1958 and sold for $60 because it was attributed to Giovanni Boltraffio, who worked in Leonardo’s studio. But the National Gallery’s 2011 exhibition of Leonardo’s works included the Salvator Mundi, which according to Christie’s “sealed its acceptance as a fully autograph work by Leonardo da Vinci … after more than six years of painstaking research and inquiry to document the painting’s authenticity.”

The identity of the real buyer was initially unknown but later revealed to be Badr bin Abdullah bin Mohammed bin Farhan al Saud, a member of the Saudi royal family who was said to be acting on behalf of the museum in Abu Dhabi.

There has been media speculation about whether Bin Abdullah had in fact been a proxy for Saudi Arabia’s crown prince, Mohammed bin Salman, who is also close to Abu Dhabi’s powerful crown prince, Sheikh Mohammed bin Zayed Al Nahyan. A US intelligence assessment had initially identified Bin Salman as the owner but the extent of his involvement in the purchase remains unknown.

The painting’s authenticity has also been questioned. The German art historian Frank Zöllner wrote in the preface to the 2017 edition of his book, Leonardo – the Complete Paintings and Drawings, that the painting “exhibits a strongly developed sfumato technique that corresponds more closely to the manner of a Leonardo pupil active in the 1520s than to the style of the master himself”.

Martin Kemp, a Leonardo scholar who co-authored Mona Lisa: The People and the Painting, however, has said that despite “very serious damage and over-painting … there are no well-founded doubts about Leonardo’s responsibility for the picture”. 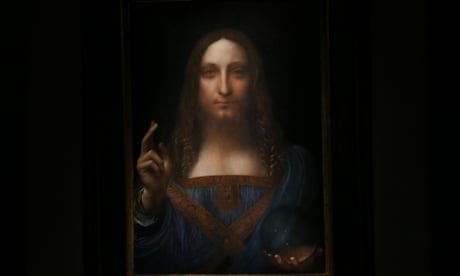 The French president, Emmanuel Macron, last year opened the new Louvre museum in the UAE after 10 years of controversy and delays. The UAE museum can carry the name “Louvre” for the next 30 years and six months in exchange for a payment to France of $525m (£407m), and an additional amount of $750m (£582m) in contract for employing French managers.

Located on Abu Dhabi’s Saadiyat Island, created in collaboration with France and designed by the leading architect Jean Nouvel, the museum was the UAE’s way of challenging its regional rival, Qatar’s Museum of Islamic Art in Doha, which has dominated the gulf art scene.

In March this year, the Louvre also opened an unprecedented show in Tehranbilled as the first large-scale exhibition by a major western museum in the country. 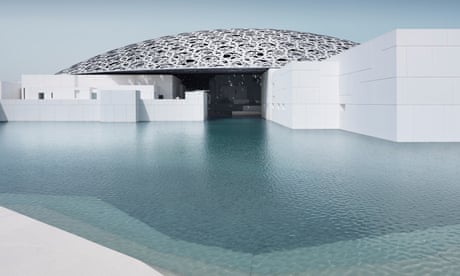 The French culture minister said in March that the Mona Lisa, Leonardo’s masterpiece that has spent nearly all of the past 500 years in Paris, could go on a rare tour of France.