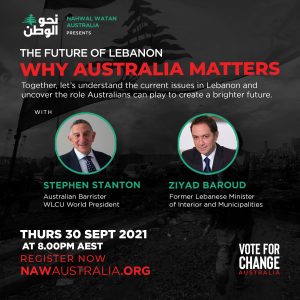 With the elections in Lebanon scheduled to take place in early 2022, you have until November 20 to register your intention to vote in AustraliaThis webinar will provide surety that change is possible and that we can seek confidence in the actions of the Lebanese diaspora in sighting a democratic electoral process.

In 2020, Lebanon endured multiple crises, including a massive explosion in Beirut’s port, an economic collapse, rising political instability, and the Covid-19 global pandemic, all of which endangered residents’ basic rights.

The Lebanese Pound has lost 80% of its value since October 2019, eroding people’s ability to access basic goods and services, including food, gasoline, electricity, and healthcare, causing a compounded poverty and economic hardship.

The Australian Lebanese community has the power to influence the direction of Lebanon’s future. Change is possible. During this webinar, we will explore how to register your intention to vote and why you should exercise your privilege in 2022.  Your voice matters. You can help shape a better future for Lebanon.

Ziyad Baroud is a Lebanese civil servant and civil society activist. He served as Minister of Interior and Municipalities, considered to be one of the most powerful positions in the country, from 2008 to 2011 for two consecutive cabinets in both Fouad Siniora and Saad Hariri’s governments.

Mr. Baroud is one of the few political personalities who is appreciated by both ends of the rivalled Lebanese political clan and thus, subsequently holds good esteem with many of the personas across the complex and contentious Lebanese political spectrum.

An attorney by qualification and practice, Mr Baroud is an expert on issues of decentralisation and electoral law reform. He is known to abstain from engaging in feudal politics and instead focus on building the Lebanese civil society and Lebanese civil institutions.

Internationally renowned, the World President of the World Lebanese Cultural Union (WLCU), Stephen Stanton is an outspoken Australian who has recently made comments calling for an international and independent tribunal to investigate the Port of Beirut explosion.

The WLCU is an international Lebanese organisation recognised by the United Nations as a body representing Lebanese expatriates or Non-Resident Lebanese (NRL) worldwide. It is a not-for-profit, independent civilian, non-political, non-racial and non-religious organisation established in New York in 1959.

Mr Stanton was admitted as a barrister in 1979 and currently maintains a wide range of practice areas, from alternative dispute resolution, constitutional law, equity, industrial and employment law to professional negligence. He has been admitted to the Kingdom of Tonga and Fiji for matters concerning overseas jurisdictions.